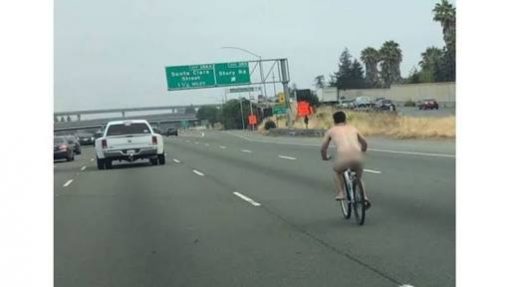 Motorists were left in shock after a naked man was spotted riding a bike on highway 101, near Alum street in San Jose.

People who saw the embarrassing incident began to call highway patrol to track down the man.

A California High Way Patrol Officer who responded to calls and arrived the scene could not find the naked man anywhere on the high way.

But the next morning,  a San Jose patrol officer located an adult male, believed to be the same man on the bike, walking on North King Road at Berberry Lane in San Jose with only a shirt on.

It was reported that the man was in a “mental crisis,” police said and was taken to a local hospital.

The Patrol Office had yet to provide more information on the incident.

Saxon is a prolific writer with passion for the unusual. I believe the bizarre world is always exciting so keeping you up to date with such stories is my pleasure
Previous Angry Youths Beat Up ‘Friendly’ Police Chief After Bus Kills Two In Ondo
Next Woman Wakes To Find 16-Foot Python Lying Next To Her In Bed