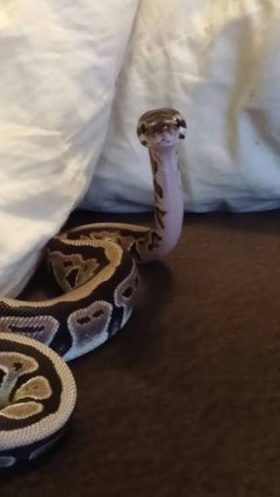 A woman in London had the shock of her life after she woke up in her bedroom to find a 16-foot python curled up next to her on her bed.

As she woke up and found the royal python beside her in her west-London apartment last week, she rushed out of the room and called Britain’s Royal Society for the Protection of Animals (RSPCA), reports BBC.

By the time the Animals Protection Team arrived, the snake had already slithered away, but was captured a day later in the apartment by officer Jill Sanders.

“The poor resident must have had the fright of their life waking up to a snake in their bed,” Sanders said, according to BBC.

The RSPCA said according to the report that it believed that the harmless intruder belonged to someone living in the area, though it did not know how the snake had entered the apartment.

“Reptiles, particularly snakes, can be extremely good escape artists and will take the opportunity of a gap in an enclosure door, or a loose-fitting lid,” Sanders added.

For some people it might take pretty long for them to sleep with two eyes closed anywhere in that apartment. Weird experience indeed.

Saxon is a prolific writer with passion for the unusual. I believe the bizarre world is always exciting so keeping you up to date with such stories is my pleasure
Previous Naked Man Spotted Riding Bike On California’s Highway 101
Next See The Breakfast Served To Corpers In NYSC Orientation Camp