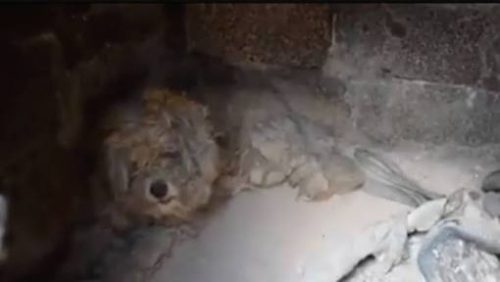 A dog has survived the wildfire that devastated the sea town of Mata, Greece after hiding in an outdoor oven.

The 4-year-old dog now recovering in a new home was found by animal rescue volunteer.

The poodle mix was found hiding in an outdoor oven outside of a home that was destroyed by the fire, which razed the seaside town of Mati on July 23.

A video recorded by animal rescue volunteer Artemis Kyriakopoulou captured the moment she found the dog hiding in an outdoor oven.

The dog, dubbed Loukoumakis by its foster caretaker, is believed to have been on its own for a while prior to the fire. Veterinarians said the canine appears to have signs of previous abuse.

The Dog’s Voice rescue group, which had been caring for Loukoumakis, said a woman with experience caring for former stray animals is expected to sign adoption papers for the canine on Thursday.

Saxon is a prolific writer with passion for the unusual. I believe the bizarre world is always exciting so keeping you up to date with such stories is my pleasure
Previous Snake Falls Out Of Banana Tree, Wraps Around Man’s Arm In Florida (Video)
Next Must Watch Viral Video Of Comedian Who Amused President Buhari By Mimicking Him