Snake Falls Out Of Banana Tree, Wraps Around Man’s Arm In Florida (Video) 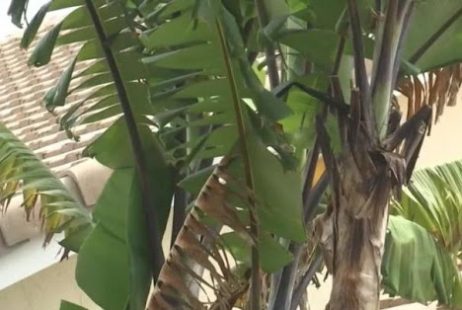 A California man visiting relatives in Florida got the surprise of his life when a snake fell of a banana tree and landed on his arm.

The 26-year-old man identified as Jake Collier, of San Francisco, said he was visiting his in-laws’ home in Melbourne Beach on Monday when a snake abruptly fell from a banana tree on the property about 10 p.m. and wrapped around his arm.

“The snake literally flew off the tree and wrapped around my arm. And I grabbed it and I threw it back into the bush,” Collier told WKMG-TV.

Collier said he wasn’t sure if the snake had bit him, so he called 911 and was examined by emergency responders, who determined he was alright.

Executive director of the Brevard Zoo, Keith Winston, said the encounter was likely just as surprising for the serpent.

“Sounds like the snake might have fallen and the guy was nice enough to break the snake’s fall,” Winsten said. “I’m sure the snake appreciated that.”

He said the reptile was likely a non-venomous rat snake.

Rat snakes have been known to make unexpected appearances in unusual locations, including slithering across a North Carolina couple’s doorbell camera and in the middle of a crowded Texas mall.

Collier said his in-laws who seemed embarrassed by the incident, decided to cut down the tree.

“If it’s going to become a hazard where a snake can jump out at you, I think it’s a good idea to take it down,” Collier said. “My arm hasn’t turned black or blue or fallen off yet, so it’s OK.”

Saxon is a prolific writer with passion for the unusual. I believe the bizarre world is always exciting so keeping you up to date with such stories is my pleasure
Previous Man Legally Changes Gender To Female For Cheaper Car Insurance
Next Dog Survives Greece Wild Fire By Hiding In Outdoor Oven (Video)