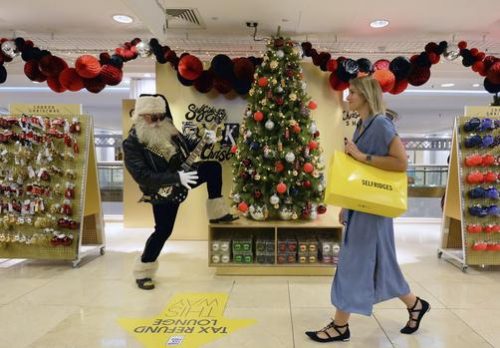 Shoppers in London who made plans to engage in early purchases for Christmas did not miss out on Santa Claus at all.

They were welcomed by a leather-wearing Santa Claus who appeared to be a rock and roll version of that character when they went in to shop at the launch of Christmas shop at Selfridges store in London last Thursday.

The Rock and Roll Santa Claus seemed to have turned up 144 days early wearing a studded leather jacket to open the new Christmas shop at department store Selfridges.

Holding a guitar and sporting black sunglasses, Santa was dressed to fit the store’s theme of “Selfridges Rocks Christmas”.

With London basking in the midst of a heatwave, T-shirts rather than Christmas jumpers seemed more appropriate but Selfridges defended the move to start the Christmas countdown almost five months before December 25.

A Ziggy Stardust Christmas tree decoration and an Elvis Presley nutcracker figure were among the rock-themed items on sale.

Saxon is a prolific writer with passion for the unusual. I believe the bizarre world is always exciting so keeping you up to date with such stories is my pleasure
Previous Have You Heard Of Masturdating? Not As Dirty As It Sounds Though
Next World Renowned Ghost Hunter Says Elvis Presley’s Spirit Is Restless