‘Ancestors’ Order Family To Stay In The Bush For Three Months 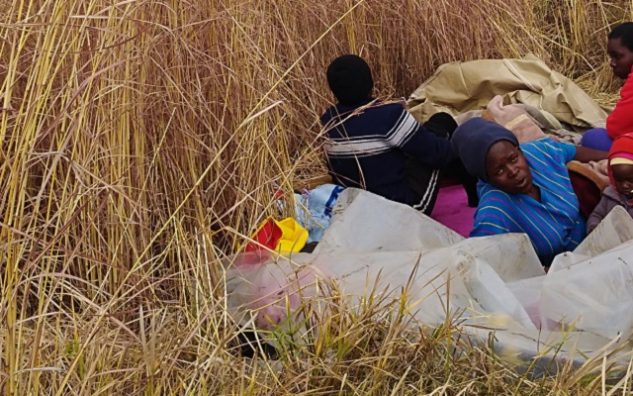 A family in Emgawini suburb, Bulawayo, Zimbabwe, who have been staying in the bush for about three months  says their ancestors gave them the order to do so.

The family, including a baby, braved the freezing weather to relocate to the bush claiming it was a divine order from their ancestors but the move is getting people worried especially because the weather is considered too cold for the baby, reports Nehanda Radio.

Some congregants of an Apostolic sect became worried about the family’s health after seeing them staying in the open with a toddler.

“This family has been staying in the bush for about a month. We are mostly worried about the baby because it’s very cold.

“They get water from a nearby stream and we suspect they are homeless because no one under normal circumstances can stay in the bush during this season,” said a man only identified as Prophet Abel.

A family member who identified herself as Gogo MaMhlophe said they were following a divine instruction.

“We stay in the bush following our ancestors’ instructions. When they talk to you, you just have to act and not ask why. They will protect us from thieves and the cold,” she said.

The woman revealed that they were told to stay in the bush for three months and August was their third month.

A traditionalist who is a member of Zimbabwe National Traditional Association (Zinatha) said Gogo MaMhlophe was not part of them.

“I do not know the woman and as healers, one can only move to the bush to do her duties, not to just stay there, worse with her children.

“I suspect she is telling lies and does not have a place to stay,” said the traditionalist who preferred anonymity.

Saxon is a prolific writer with passion for the unusual. I believe the bizarre world is always exciting so keeping you up to date with such stories is my pleasure
Previous Teenager Throws 8-Year-Old Boy Off 31-Foot-High Water Slide Platform Because Line Was Moving SLowly
Next Two Zimbabwean Secondary School Pupils Fight In Public Over Sugar Daddy