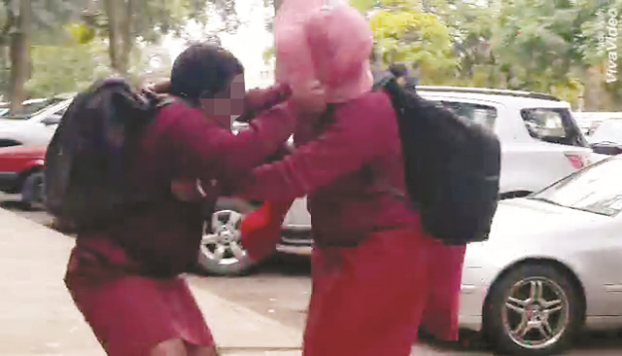 In what could be described as a show of shame, two pupils of Seventh-Day Adventist-run secondary school in Bulawayo, Zimbabwe, were seen fighting in public over a sugar daddy.

The fight was said to have taken place sometime last week outside Bulawayo city hall.

People who had been watching the two girls engage in the brutal exchange of punches had to intervene as the fight turned dirty when one of the girls started bleeding.

One eyewitness who pleaded anonymity said he was a classmate of the two girls, adding that they have been fighting over the man for a long time. He said the man was supporting two of them financially, reports B-Metro.

“I know both of them and they have been fighting over the unidentified man for a very long time. It is believed that this man lives close to our school and he is offering financial support to both of them,” he said.

Saxon is a prolific writer with passion for the unusual. I believe the bizarre world is always exciting so keeping you up to date with such stories is my pleasure
Previous ‘Ancestors’ Order Family To Stay In The Bush For Three Months
Next See Vietnamese House With Fence Made Entirely Out Of Old TV Sets