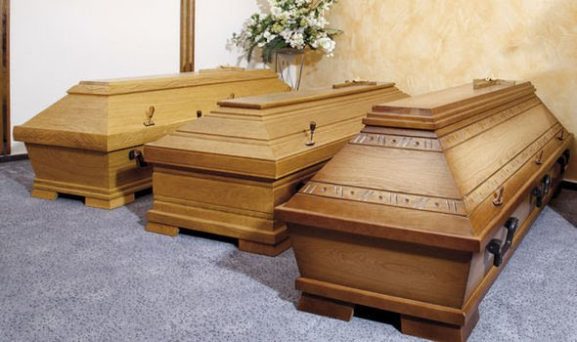 A South Korean woman has died after suffocating in a coffin during a religious ritual which was supposed to bring her good luck.

The woman who slept in the coffin Overnight as part of the ritual designed to bring her good fortune ran out of luck after she suffocated inside.

Reports say the woman, who has not been named but was in her 40s, was taking part in a therapeutic ceremony of what police described as a “pseudo religion”.

The absurd ritual took place overnight with three women sleeping in wooden coffins under the belief that spending the night in the boxes would rid them of bad spirits and ensure better luck for the future.

The women got into the coffins at around 8pm in an apartment in the the city of Gumi, in the central region of South Korea, police told the Yonhap news agency.
The two survivors told police that the woman who died tried to get out of her coffin after about two hours, complaining that she could not breathe and that it was too hot.

But her friends persuaded her to endure the discomfort and carry on with the bizarre ritual.

At around 6.30am the following morning, one of the other women woke and lifted the lids of the coffins to find one of her friends sleeping soundly but the other woman dead.
A police officer investigating the case said the coffin was airtight and that the woman had apparently not noticed before she suffocated.

Investigators said the women were members of one of many cults that have cropped up in South Korea in recent years promising to solve all sorts of personal, spiritual or financial problems through unconventional forms of worship.

It is suspected that extreme heat in the Korean Peninsula where daytime temperatures have been hovering around 40C and nights only a few degrees cooler may have contributed to the woman’s death.

Saxon is a prolific writer with passion for the unusual. I believe the bizarre world is always exciting so keeping you up to date with such stories is my pleasure
Previous Beauty Queen Gives Up Crown After She Was Told To Cover Up Tattoos
Next Actor Who ‘Died’ For 7 Minutes Paints Life-After-Death Pictures Of What He Saw