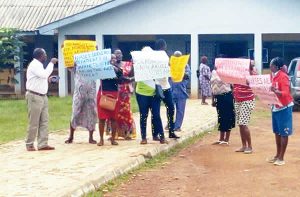 A psychiatric patient at Ondo State Neuro-psychiatric Hospital, Akure, has sparked off a showdown between workers and government after allegedly stabbing two nurses and beating up the Medical Director of the hospital.

The incident left to a protest by nurses at the hospital who are asking that the state government should do more about their safety and general welfare.

PUNCH reports that the protest was staged after a patient, identified as Folorunsho Olawale, who was brought in by men of the Ondo State Police Command, allegedly attacked the nurses on duty and destroyed some equipment of the hospital on Wednesday.

A source said Olawale went to a police station in Akure and allegedly confessed to have been involved in the killing of Khadijat, the daughter of a former deputy governor of the state, Alhaji Lasisi Oluboyo.
According to the source, “After he was quizzed at the station, the police suspected that Olawale had a mental problem because his statement was incoherent and he was behaving abnormally. He was subsequently taken to the psychiatric hospital.”

The source said the patient was aggressive at the hospital, adding that on Wednesday, he allegedly stabbed two nurses and beat up the Medical Director of the hospital, Dr Akinwumi Akinloye.
It was gathered that this incident was reported to the Permanent Secretary of the Hospital Management Board, Dr Niran Ikuomola, by the nurses and other medical workers of the psychiatric hospital.

Ikuomola was said to have told the workers to go back to their offices, which did not go down well with the employees.

Ikuomola’s reaction allegedly led to the Thursday protest, as the workers vowed not to return to work until the government addressed issues of their welfare and safety.

In a swift reaction, the permanent secretary accused union leaders of the hospital of inciting employees against the government, saying the workers had the right to table their grievances, but in a peaceful manner.