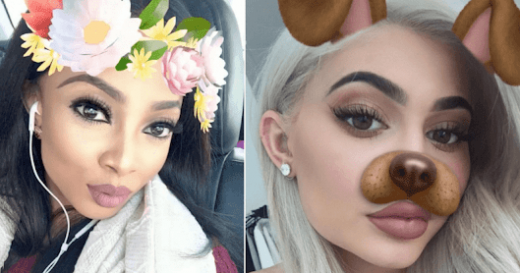 Technology has brought with it facilities that make it possible for people to enhance their images or selfies on platforms such as snapchat or Facetunes. You find people adding flowers, horns, nose and adjusting their skin colour and smoothness to look more beautiful or attractive. They use apps to create an image of themselves which they feel is much better than their original look, an image referred to as snapchat filter. This has led to serious warning by doctors of a growing craze for plastic surgery to look like snapchat filters.

Well, this trend has been identified as an emerging ailment called “Snapchat Dysmorphia” and Doctors say an increasing percentage of those coming for plastic surgery these days to enhance their beauty are those who have enhanced their images through snapchat. These people suddenly want to look like the snapchat images they enhaced because they have suddenly become dissatisfied with their natural look.

Snapchat Dysmorphia is the result of a changing trend. In the past, plastic surgery patients usually bring in photos of celebrities to show their surgeon what they wanted to look like, but in recent years, this is becoming less common. Patients are now more likely to present surgeons with their own selfies that have been enhanced using apps such as Snapchat or Facetune.
This trend has led to suggestion that wanting to look identical to your perfected Snapchat selfies is a new psychological phenomenon scientists are calling “Snapchat dysmorphia”.

Experts are giving worrisome picture of that trend. According to Dr. Neelam Vashi, director of the Boston University Cosmetic and Laser Centre: “A new phenomenon called ‘Snapchat dysmorphia’ has popped up, where patients are seeking out surgery to help them appear like the filtered versions of themselves.”

Apps such as Snapchat allow you to add things like unicorn horns and dog ears to yourself. They also offer a wide range of filters that can smooth your skin, change your eye color, or make your face appear smaller. Previously, this kind of technology was a lot more expensive and complex; you would typically only see this kind of ultra-perfection applied to celebrities in magazines. But these days, smartphones have made them accessible to anyone who cares to have them.

The term Snapchat dysmorphia comes from body dysmorphic disorder (BDD). Sufferers of BDD are obsessed with their perceived physical flaws; these flaws may not necessarily be visible to others. It seems that social media may be leading to more people suffering from these kind of issues. Research has suggested that selfie culture is changing the way that people see themselves. Around 55% of facial plastic surgeons have reported they encounter patients who choose to go under the knife to look better in their selfies.
Research has also suggested a connection between posting edited selfies on social media and levels of body dissatisfaction. A 2015 study of adolescent girls found that those who shared these kinds of pictures on social media were more likely to have self esteem issues.

Some may argue that this new technology is actually a good thing for people’s self image, as it has “pulled back the curtain” on the possibilities of photo editing. When the technology was more exclusive, it was less widely understood; the average person was more likely to believe an edited photo of a celebrity was totally genuine.
In response to the controversy surrounding Snapchat dysmorphia, a Facetune spokesperson said: “Facetune and Facetune 2 are actually breaking the illusion of ‘perfect body’ ideals. Everyone — from famous supermodels to your aunt — use it, and everyone knows everyone is using it. Arguing otherwise is naive. It levels the playing field for everyone.”

So what do you think? Is this a cool trend? Do you think the experts a worrying a bit too much?

Saxon is a prolific writer with passion for the unusual. I believe the bizarre world is always exciting so keeping you up to date with such stories is my pleasure
Previous Cocaine Found Hidden In 15 Loaves Of Bread
Next Kidnapper Who Took Tramadol And Slept Off At Victim’s Home Still Sleeping In Police Custody 6 Days After