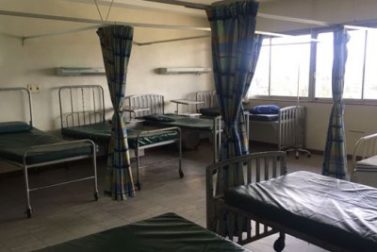 You may described this as taking love too far but it is a bizarre way to consummate relationship in public.

A prominent business man in Masvingo, a city in Southeastern Zimbabwe, has been apprehended for having sex with his wife in a hospital in front front of other patients.

The incident which took place at about 3am on Saturday happened in the presence of 10 other patients admitted in the all female ward of the hospital where the man’s wife was admitted.

Reports have it that the man who had a large shop in the city center had argued with nurses on Saturday at about 3am, insisting that he should be allowed to go in and see his sick wife.

After resisting for a while, the nurses agreed after the sister-in-charge, Leticia Manwa intervened, but they never knew the man had other plans up his sleeves.

Shortly after he got into the ward, he began to have sex with his wife and their ecstatic noise was distracting other patients who must have thought they were watching a reality TV adult show live. Security guards in the hospital who were summoned disengaged the couple and drove the man away. Reports say he was counselled before being released.

The incident which has been confirmed by the Provincial Medical Director, Amadeus Shamu, is currently under investigation, reports znews.

Sources say the man’s wife was admitted into the hospital on Friday afternoon after suffering hysteria. The hospital came to see her in the hospital in the early morning of Saturday, about 3am, when the incident happened.

Tags man has sex in hospital

Saxon is a prolific writer with passion for the unusual. I believe the bizarre world is always exciting so keeping you up to date with such stories is my pleasure
Previous Man Who Stole Airplane Said He Didn’t Need Help Because He Had “Played Some Video Games”
Next Teenage Boy Found Taking Alcohol With Adults Forcefully Circumcised