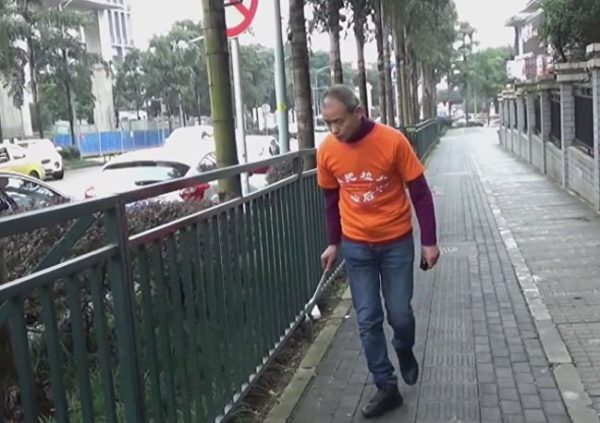 This is an expression of amazing humility coming from a millionaire.

Zhong Congrong is now know as the “the millionaire trash collector.” He is a 52-year-old successful from Chongqing, China, who has maintained the habit of walking around his street with a trash-picking claw and picking up any garbage he finds.

The entrepreneur began cleaning up the streets of Chingqing three years ago, after a family trip to southern China’s Hainan province, for the Chinese New Year. It while on that trip that he met a retired university professor who was said to have been picking up trash from one of the local beaches every day, for the last four years. Zhing was so impressed with the woman’s dedication and commitment to trash collecting that he decided to replicate her daily habit in his home city, as soon as he got back from his vacation.

The millionaire trash collector’s habit was not acceptable to all at the initial stages. Both the media and his fellow local residents couldn’t understand why a millionaire who owns real estate, car dealerships and several material processing factories would stoop to picking up trash by hand. The initial reactions were negative. People though it was nothing more than a stunt to attract attention, but Zhong didn’t let the negativity distract him.

Zhong’s wife and children were also initially embarrassed by the negative media coverage of his “eccentric habit” and refused to be seen with him in public. But as time went by, people’s attitude changed. They noticed their neighborhood getting cleaner thanks to Zhong’s efforts and started praising and supporting him. His wife is now an anti-littering campaigner herself, and scolds everyone she sees throwing trash on the street.

“Whether we throw away or pick up trash is unrelated to our academic degree, cultural background, age, or socio-economic status,” Zhong Congrong told Sixth Tone in December 2017.

The succesful entrepreneur has been doing his best to inspire others as well. He wears an attention-grabbing orange t-shirt featuring anti-littering slogans whenever he goes on his garbage hunting missions, and fines all of his workers 10 yuan if they litter at the workplace.
But Zhong knows full well that broader measures are needed for a true change.

“China needs stricter regulations to deter would-be litterers,” Zhong said. “Relying on self-discipline won’t be enough. Chinese people are afraid of ‘losing face.’ They care less about how much they’re fined and more about the shame that comes with it.”

Zhang’s impressive habit has inspired many in China. Reading this might also be a source of inspiration to anyone.

Saxon is a prolific writer with passion for the unusual. I believe the bizarre world is always exciting so keeping you up to date with such stories is my pleasure
Previous Woman Makes N18 Million From Selling Luxury Chicken Diapers
Next Man Puts Up 300 Billboards and Posters Overnight To Ask His Girlfriend To Forgive Him