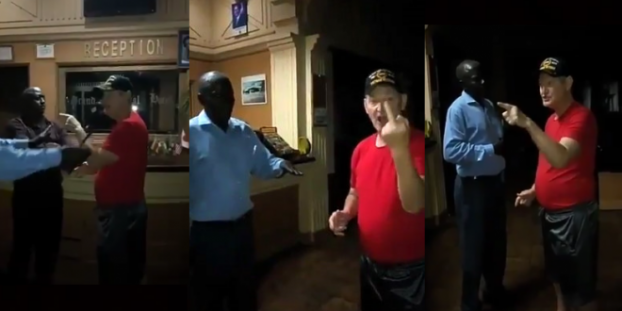 A viral video has shown the most shocking outpouring of racist expressions and physical attacks by an American pastor upon a man whom the pastor felt had wronged him.

The Pastor, Jimmy Taylor, was recorded while he was physically and verbally assaulting a staff of the Imperial Hotel, Uganda where he was staying. Taylor was apparently on a pastoral mission in Uganda.

The video was sent to the police who arrested Taylor after viewing the content.

Uganda’s police arrested the American citizen, and detained him on charges of assaulting a worker at the Grand Imperial Hotel in the capital Kampala.

In a tweet, the police force expressed gratitude to the community for vigilantly sending them a video of the incident.

“We have arrested the suspect, Jimmy Taylor, an American citizen. He was detained at the Central Police Station, Kampala on charges of assault,” read part of the tweet.

The video of the racist American pastor emerged online showing him pursuing a hotel employee and slapping him several times on claims that he “disgraced Jesus.” In the video, Taylor kept trying to aggravate Francis, and also turned on a man in a blue shirt who attempted to intervene, telling him;
““NO! NO! You obey what I say. I don’t obey you. Open my f****** room now! You b**** Look at me! Look at Christ who died for you,” the American says.

According to Daily Mail reports: The five minute clip sees Taylor, sporting a Vietnam Veteran cap, follow hotel workers saying “You hate Jesus, you hate yourself?” then hit a worker in the face, challenging him to fight saying, “come on bitch!”

“Fuck Uganda. I’ve come to love Uganda, I’ve come to help Uganda, but Uganda hates Jesus through this son of a bitch,” ,” he said pointing at a worker. Then he calls the staff “n***er bitch” adding “You’re not a human” as he smacks him in the back of the head, ranting about God and demanding his room be opened for him.

Ugandans were appalled at the racism spewed out by this American citizen in the name of Christianity.

Saxon is a prolific writer with passion for the unusual. I believe the bizarre world is always exciting so keeping you up to date with such stories is my pleasure
Previous Rooftop Cattle Lowered In Karachi Amidst Cheers Ahead Of Muslim Festival (Video)
Next Woman Makes N18 Million From Selling Luxury Chicken Diapers