A young Indian business man has decided not to take chances in ensuring that his relationship with his girlfriend does not crash. He put up 300 billboards, signs and posters asking the lady to forgive him. 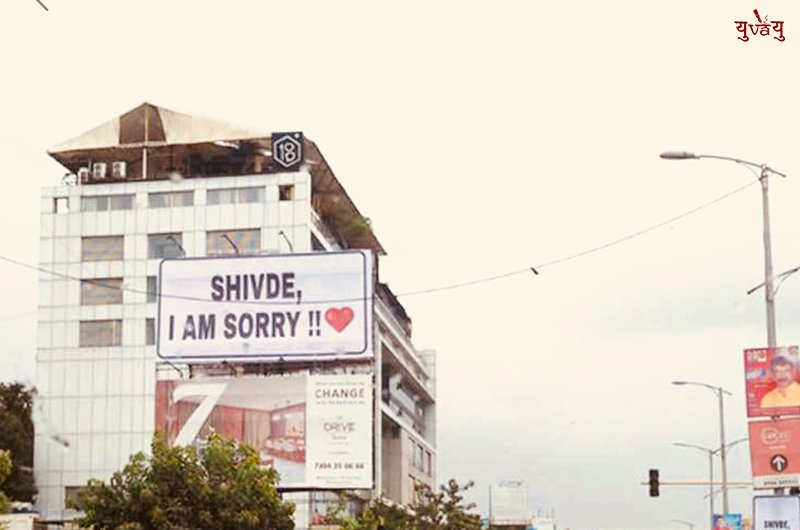 Nilesh Khedekar, 25, felt it was a good move to put up the posters and impress his girlfriend to forgive him.
Last week, after hearing that the girl, named Shivde, was returning from Mumbai to her home in Pimple Saudagar, a suburb of Pune, the young man decided he had to come up with a creative way of showing her just how sorry he was about their argument. He got in touch with a printer and commissioned hundreds of different-sized posters with the message “Shivde, I am Sorry!”. Then, on the night before the girl’s scheduled returned, he paid a group of boys to hang the signs and billboards all over her neighborhood.
On Friday morning, the people of Pimple Saudagar woke up to 300 posters and signs on buildings, lamp posts and billboards, all carrying the same mysterious message and a heart sign.
The plan immediately went viral as people started taking photos of the signs and posting them on social media, and by midday, they had become the talk of the town. While most people online thought it was romantic how someone had gone to all this trouble to apologize to their loved one, the local police weren’t so impressed.

By Friday evening, authorities had already tracked down the printer, the boys who had put up the posters and eventually the man who had orchestrated the whole thing, Nilesh Khedekar. He told police about the argument he had had with Shivde, and how he tried to do something creative to earn her forgiveness, like putting up hundreds of posters on the route she would return on from Mumbai.
“Khedekar told that he had some differences with his girlfriend whom he called ‘Shivde’. In order to apologise to her he came up with this idea of putting up hoardings and banners in the area where she stays. Khedekar roped in his friend to execute the plan,” a police officer told DNA India.

Unfortunately for the 25-year-old director of a family-owned company, his plan didn’t work out quite the way he wanted. After spending a reported RS72,000 ($1,000) to have the posters printed and put up around town, all he had to show for it was a formal complaint from Pimpri-Chinchwad Municipal Corporation (PCMC) officials, for defacing the locality. It’s unclear what the penalty is in such cases, but it most likely involves a fine.
“The entire thing has turned ugly. My idea was to be creative in apologising to her. Now I think I shouldn’t have done it in the first place. I have let my parents down. I have let her (girlfriend) and her family down as well,” Nilesh said.

Saxon is a prolific writer with passion for the unusual. I believe the bizarre world is always exciting so keeping you up to date with such stories is my pleasure
Previous See Chinese Millionaire Who Spends His Free Time Picking Up Trash From The Streets Of His City
Next Oldest Alligator In The World Is In His 80s And Still Looking Strong At Belgrade Zoo