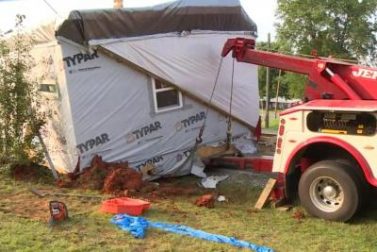 Half of a manufactured home has fallen off a truck causing some stir but no one was lost.

Police in South Carolina have charged a truck driver with carrying an unsecured load after a manufactured home on the truck fell off.
Haw River Police Sgt. Doug Faulls said the truck lost its load about 3:39 p.m. Monday at Roxboro and North Wilkins roads in Haw River.
No injuries were reported from the incident.
Dennis Dudley, 57, the driver of the truck, was charged with failure to secure a load.Faulls said excessive speed was being considered as a contributing factor in the incident.

The half home was being transported from Martinsville, Va., to Folly Beach, S.C.

Saxon is a prolific writer with passion for the unusual. I believe the bizarre world is always exciting so keeping you up to date with such stories is my pleasure
Previous Thief Steals Snake From Pet Store By Hiding It Inside His Pants
Next Bizarre Condition Makes Man Elastic, Allowing Him To Turn 180 Degrees And Walk Backwards