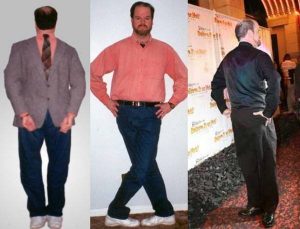 Human beings are created to face and walk forward but there’s a man living with a strange condition that makes him turn 180 degrees and even walk backwards if he wishes.

The man, Moses Lanham, is now known as ‘Mr. Plastic’ because of his unusual ability to turn his legs along with his knees 180 degrees and walk backward.
The 57-year-old man from Michigan, discovered his superhuman ability when he was only 14-years-old. He was climbing a rope in gym class when he lost his grip and crashed to the floor, landing awkwardly. At first, he thought something was dislocated, but he soon realized that he could easily turn his lower legs 180 degrees and back again without experiencing any pain. Medical tests revealed that he was able to do this thanks to of double cartilage in his hips, knees and ankles. He has been using this gift to freak people out ever since.
“One time, I’ve actually had a person throw up after I turned my feet around,” Lanham proudly told The Wizard of Odd. “When I perform this in front of people I love the reactions. A lot of people are just amazed.”

This unusual ability has helped Lanham break two world records, one of which he still holds. He lost the title of World’s Most Flexible Feet, but is currently the world’s fastest man to walk with his feet backwards over a distance 20 meters.
As far as he knows, other people can turn their legs backward as well, but he is the only one who can walk that way. And he actually prefers to walk backward.
“A lot of people ask me if it hurts or feels uncomfortable – it’s actually more comfortable this way,” he said.

Vanko is a cheerful writer whose enthusiasm for unusual stories is inspiring.
Previous Manufactured Home Half Falls Off Moving Truck
Next Have You Heard Of Resignation Syndrome? Strange Illness Which Makes Children Exist Like The ‘Living Dead’