Efe Ajagba has won another match in the most unbelievable manner. His opponent, Curtis Harper, just walked out of the ring after touching gloves with him. 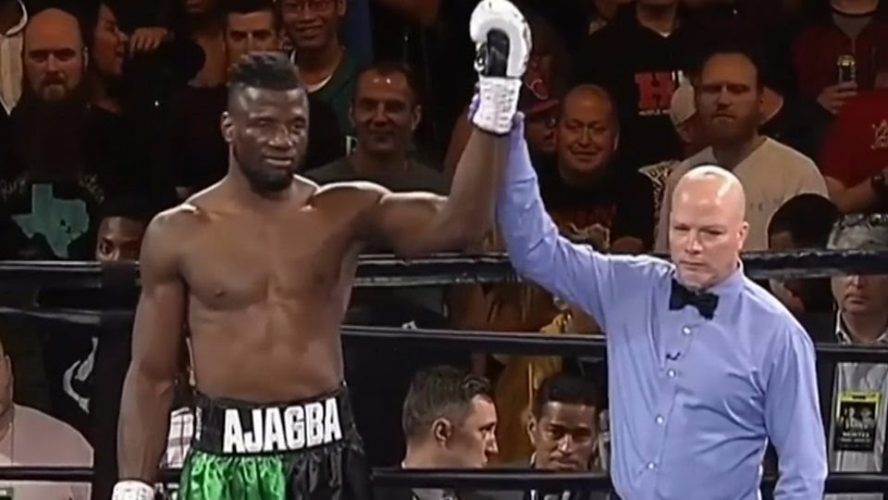 Harper has received heavy criticisms by his trainer for leaving the ring after the opening bell of a heavyweight bout in protest over pay.
The 30-year-old American instantly walked out of the arena when the bell sounded for his bout against Ajagba of Nigeria in Minneapolis.
Visibly angry trainer, Nate Campbell, said he was “embarrassed” by his fighter’s move.
“This man disrespected himself, his wife, the fans and me,” Campbell posted on social media.

Journalist Jordan Hardy – who works for Premier Boxing Champions, which was broadcasting the fight – said Harper told her the walkout was because of money.
“He walked out of the ring because he’s not getting paid enough to fight and that he wants respect,” she wrote on social media.

Promoter Leon Margules told BBC Sport organisers had no idea of Harper’s plan before the bout and confirmed the fighter received no payment as a result.
“He signed a contract and agreed to the fight,” said Margules. “First time we heard about money issues was after he left the ring. He weighed in and showed up on time and even touched gloves before the bell. It is strange.
“If he didn’t like the deal, why did he accept the fight and money?”
Harper had reached the bottom of the steps at the side of the ring with just five seconds gone in the round.
Fans began booing as he made his way along the walkway out of the ring and officials disqualified him at the one-second mark of the first round.
Britain’s former unified heavyweight champion of the world Lennox Lewis shared footage of the incident on social media.
Writing on Twitter, Dave Coldwell, trainer of British heavyweight Tony Bellew, said: “Boxing…expect the unexpected!! Can’t say I’ve ever seen this before!”
Harper now holds a record of six defeats and 13 wins, while Ajagba, 24, has six wins from six, including five knockouts.

Saxon is a prolific writer with passion for the unusual. I believe the bizarre world is always exciting so keeping you up to date with such stories is my pleasure
Previous ‘Civilized’ Alligator Uses Zebra Crossing To Cross Road In South Carolina (Video)
Next Mother Sells Six-Week Old Baby, Buys Phone With Proceeds