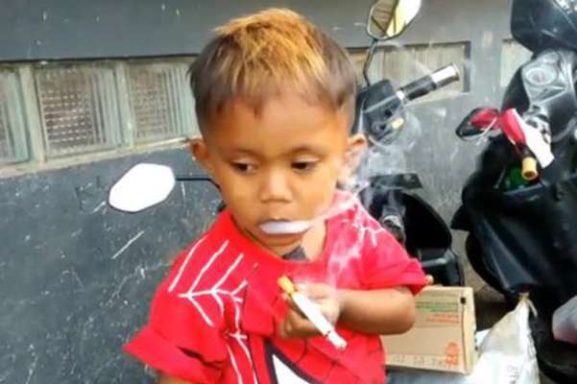 A two-year-old Indonesian boy has formed a disturbing habit of smoking 40 sticks of cigarette a day, a habit he began by picking up discarded cigarettes butts outside his mother’s shop, lighting them up and smoking them.

The toddler now smokes at least 40 cigarettes a day.

Rapi Ananda Pamungkas, a toddler from Sukabumi, Indonesia, started by picking up cigarette butts outside his mum’s market stall and within days he was addicted and would endlessly pester passing shoppers to give him cigarettes.

The people he was requesting cigarettes from adults initially felt the youngster’s demands was novel and offered him cigarettes, thinking it was a joke while he lit up. But Rapi nicknamed Rap soon started becoming aggressive and throwing tantrums when he couldn’t get his favourite ‘meroko’, the local term for cigarettes.

Rapi’s mother, Maryati, 35, confessed on Monday that she buys two packs of cigarettes a day for the boy to stop him from going ‘berserk’.

She said, “My child is used to smoking while drinking coffee and eating cake. He has been smoking every day for about two months. If I don’t give him a cigarette, he goes berserk.’

“If Rapi doesn’t get cigarettes he cannot sleep. He will start rampaging and crying. It’s expensive because we have to buy them for him. He likes to do it all day. He can smoke about 40 daily.”

Rapi’s father, Misbahudin, 40, said he also smokes but doesn’t know why his child started the habit.

He added, “I cannot say no to him when he asks for a cigarette. I don’t even smoke that often. I only smoke at work. When my son smokes he likes to have a cup of mochaccino.”

“He has been smoking every day for around two months. If I don’t give him a cigarette, my child goes berserk. If Rapi doesn’t get cigarettes he cannot sleep. He will start rampaging and crying,” Maryati told reporters.

The parents (who have attracted some harsh criticism online) said they will take the toddler to see a doctor to help him quit his smoking addiction.

Rapi’s habit serves as a serious warning to parents that when they fail to say no to your kids after observing a wrong habit, it could quickly spiral out of control.

Indonesia has one of the highest rates of smoking in the world, and child smokers are becoming a real problem. According to statistics, around 9% of Indonesians under the age of 18 smoke regularly.

In 2010, Ardi Rizal, who was also 2-years-old at the time, also made international news headlines for his 40-cigarettes-a-day habit.

With reports from Punch and Oddity Central

Saxon is a prolific writer with passion for the unusual. I believe the bizarre world is always exciting so keeping you up to date with such stories is my pleasure
Previous Man Pretends He Was Robbed, Slashes His Own Arms To Avoid Buying Girlfriend Expensive Car
Next Multi-Purpose Preacher On Duty