Modern Scarecrows Use Laser To Chase Away Birds (Watch Video) 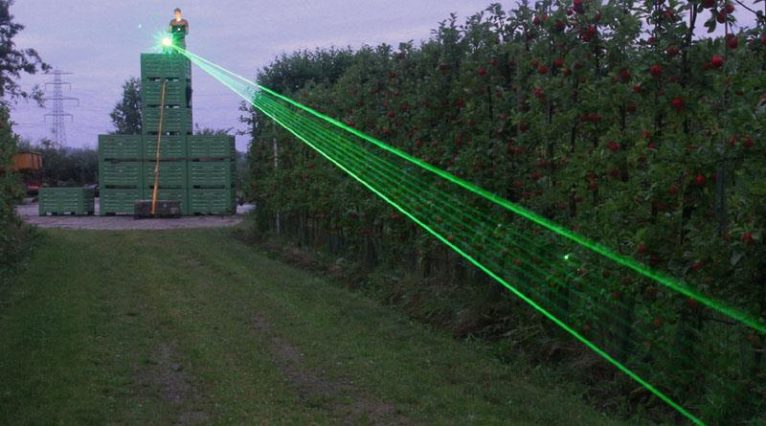 This is farming technology at its peak. ‘Scarecrows’ are now like what you see in Hollywood science fiction movies, using laser to keep ‘enemies’ away. Whether it is night or day, the laser ‘scarecrow’ does a big job keeping birds at bay.

A blueberry farm in Oregon which was having huge problems with birds stealing up to 25% of their crops and this year, came up with the laser technology to tackle the issue.
When the blueberry growing season commenced, the farm installed 6 Agrilaser Autonomics—automated laser guns which are mounted on a pedestal. These laser guns shoot a steady green laser beam across the bushes. The birds seem to mistake the laser for an incoming predator, and will immediately flee whenever the laser comes close to them.
Th8s technology is yielding immediate results.
Bird Control Group, the company that makes the lasers, claims that their technology has reduced the number of birds on the farm by 99%. The farm believes that the lasers have saved around 262,500 kilograms of blueberries—that is around $99,733 saved!

This technology did not come easy. The laser took around 4 years to develop. In that time, Bird Control Group tested various colors, wavelengths, and beam widths. They decided on a wide, green beam and applied filters to it to reduce the amount of harmful infrared radiation. “We learned the characteristics of what we call the ultimate laser beam for dispersing birds,” says Steinar Henskes, CEO.
But what made them settle on green?

“We researched the color that sends the most amount of signals from the birds’ eye to the brain, so it’s perceived as more intense,” Steinar said. “It’s roughly eight times more effective than red, for example.”

There’s another major reason the laser technology has been incredibly success. This is based on the sweeping pattern of the laser. The company tested many different patterns and discovered that some were significantly more effective than others at deterring birds. The laser patterns are always customized for each site to make them as effective of a deterrent as possible.
Not only do the lasers now operate in farms around the world, but they are also used in settings such as airports and oil rigs. The laser technology is now in place at over 6,000 facilities worldwide. Unlike other methods of dispersing birds (such as scarecrows), birds do not become accustomed to the laser; it can remain effective years after its initial installation.

There is one downside—the laser’s amazing results don’t come cheap. Each laser gun costs around $10,000 and most places will need more than 1. At the moment, the lasers are not capable of differentiating between different types of birds, nor is it possible for them to only activate when birds are present.

Saxon is a prolific writer with passion for the unusual. I believe the bizarre world is always exciting so keeping you up to date with such stories is my pleasure
Previous Outrage As Nail Salon Gets Slammed For Sealing Live Ants In a New Transparent Nail Fashion
Next Woman Scammed Into Marrying Total Stranger After She Was Told It Was Just A Mock Wedding For A Job