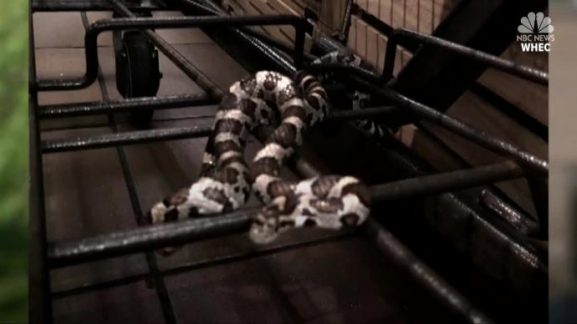 A woman has received more than she purchased in a supermarket after she discovered that a snake had curled around the bottom rack of the cart she had used.

Laura Walitsky, who was shopping for groceries says she was surprised to find a snake on her shopping cart while picking out produce at Wegmans Supermarket,  New York.

Walitsky says she was at Wegmans in Pittsford on Monday evening when her daughter spotted the hitchhiking reptile wrapped on the bottom of her cart.

She did a quick Google search on her phone and concluded the reptile wasn’t venomous.

The Rochester Democrat & Chronicle reports the woman then walked the cart outside and had her daughter tell customer service there was a snake on it.
Walitsky managed to call the attention of two employees of the supermarket who removed the snake and placed it in a nearby wooded area.

A Wegmans spokesperson said in a statement that “this was an isolated incident.”
Biology professor Bradley Cosentino identified the pictured snake as a non-venomous milk snake, a common snake species.

Saxon is a prolific writer with passion for the unusual. I believe the bizarre world is always exciting so keeping you up to date with such stories is my pleasure
Previous Woman Suddenly Finds Dead Lizard In Salad After Taking Few Bites
Next See Hilarious Warning Anambra Landlord Placed On His Property