Home / Europe / Burglar Suspect Arrested After He Was Wedged Between Wall, Garage

Burglar Suspect Arrested After He Was Wedged Between Wall, Garage 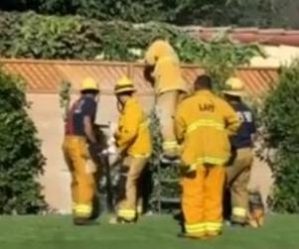 It was end of the road for a man who was suspected to be a burglar after he was trapped for hours between a wall and a garage in another man’s house.

Los Angeles Police Department (LAPD) revealed that the burglary suspect was arrested after he was rescued from his position between a wall and a building.
LAPD said a homeowner checking their security camera footage about 11:30 p.m. Wednesday night saw a person wandering the property.

The homeowner decided to check the property Thursday to see if anything had been disturbed and they found the man was wedged between a wall and the home’s garage.

The Los Angeles Fire Department responded about 8:10 a.m. and it took more than an hour to free the man, who had sustained minor injuries from his ordeal.
No one knows how long he had been wedged.

LAPD Officer Rosario Herrera said the man was arrested on suspicion of trespassing and police suspect he may have been involved in a nearby burglary earlier Wednesday evening.

Saxon is a prolific writer with passion for the unusual. I believe the bizarre world is always exciting so keeping you up to date with such stories is my pleasure
Previous See Three-Dimensional Tattoos On Dark Realism By Talented French Tattoo Artist
Next Giant Python ‘Commits Suicide’ In Imo Zoo