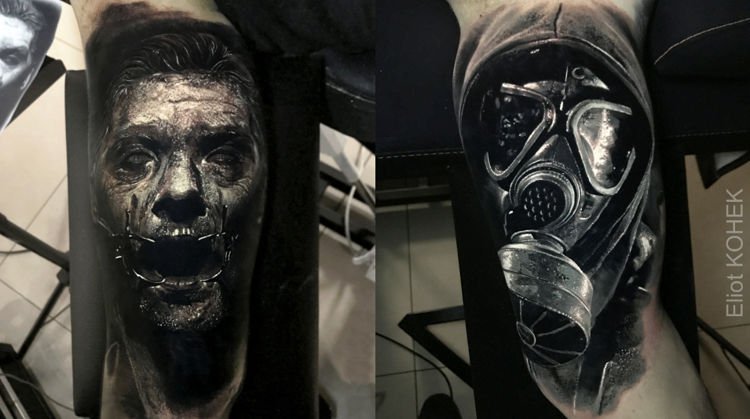 The world’s most talented tattoo artist has continued to impress with tattoos that look like very real images.

French tattoo artist, Eliot Kohek, who is a master of black and grey realism, has inked some tattoos on his clients over the years which look ready to jump off of their skin.

This man has formal artistic training yet he is this good.
He became sure of the fact that he wanted to be a tattoo artist after attending a tattoo convention at the age of 19. He then left his job and became an apprentice under a man who allowed him to watch as he inked images on people. Kohek then began to practice what he had learnt on his friends and today he is so good that he’s regarded as one of the world’s most talented tattoo artists. He majors in black and grey tattoos because he likes how monochrome tattoos highlight details like a charcoal drawing.

In an interview with French magazine Inkage, Kohek said that he had been drawn to the hyper-realist side of tattooing from the very beginning, as this style is considered the most intriguing and gets the most reactions out of people. He has been focusing almost exclusively on dark realism for the past nine years, and today that style is considered his specialty.

Saxon is a prolific writer with passion for the unusual. I believe the bizarre world is always exciting so keeping you up to date with such stories is my pleasure
Previous See Hilarious Warning Anambra Landlord Placed On His Property
Next Burglar Suspect Arrested After He Was Wedged Between Wall, Garage