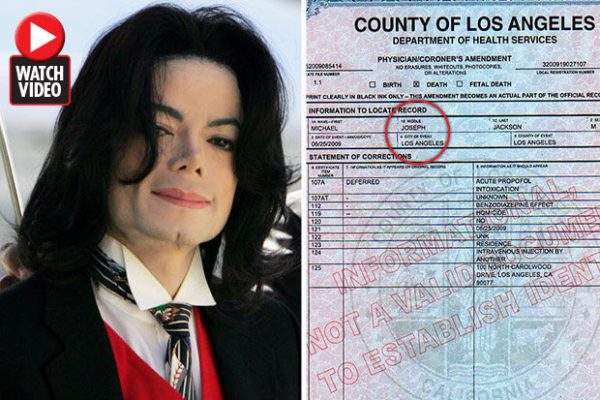 Conspiracy theories widely circulating online are claiming that Michael Jackson’s death may have been taken based on observed mismatch on his death certificate.

Last week Wednesday marked 60 years since the “Thriller” singer was born and fans from around the world came together to celebrate.

Jackson passed away on 25 June, 2009, from an overdose of prescription drugs.

But many fans of the King of Pop, to this day remain adamant he is still alive, with countless theories doing the rounds online.

But now, just two days after what would have been his 60th birthday, a new video has surfaced that could be a contender for the strongest piece of evidence yet.

According to Jackson’s passport, he was given the middle name “Joe” after his father.

But the death certificate used the full spelling of “Joseph”.

Though it would seem to be just a nickname, a fan reportedly quizzed his sister La Toya on Twitter what his full name was.

She confirmed it was Michael Joe Jackson, but the post has apparently been removed.

Fans around the world are now claiming this is proof his death was faked.

The video footage was uploaded to YouTube, where it has already racked up nearly 60,000 views.

Saxon is a prolific writer with passion for the unusual. I believe the bizarre world is always exciting so keeping you up to date with such stories is my pleasure
Previous Giant Python ‘Commits Suicide’ In Imo Zoo
Next ’US Will Drop GAY BOMBS’! Turkish Journalist Claims Trump Has New Missile That Can Change Sexual Attraction