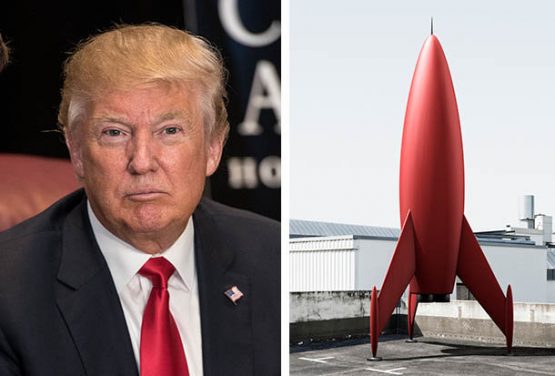 This sounds weird but that’s a serious claim made by a Turkish journalist of international repute.

According to the respected journalist, the United States of America has may have concluded plans to drop bombs on their enemies that change their sexual orientation.

Writing in his Monday (August 27) column for Turkish daily newspaper Sabah, Mehmet Barlas, 76, said that in warfare “…It [The US] plans either to drop a bomb that will change the sexual preferences of that country’s population or one that will kill them all.”
Burlas said the US plans to control he world population and the gay bomb could be an alternative to nuclear bombs such as the ones dropped on Hiroshima and Nagasaki in World War II.
“American specialists were working on a bomb that would make the enemy soldiers homosexual in 1944,” he said.
“When this bomb was fired at a distance, the enemy soldiers would feel the sexual attraction against each other.”
The veteran reporter added medicine could be a way to distribute “population control” and used the example of the flu vaccine as one that keeps “men away from their partners for at least two months”.
He also claimed the CIA was behind the “Arab Spring” – a wave of uprisings in North Africa and the Middle East in 2010.
The Turkish lira nose-dived recently after the US imposed trade sanctions because an American Christian pastor has been detained in Turkey on terrorism charges.
President Donald Trump authorised a doubling of tax duty on aluminium and steel imported from Turkey.

In a speech to French ambassadors in Paris, Mr Macron said: “Do we think today that in a clear and honest manner we can continue accession negotiations with Turkey to join the European Union?”

Saxon is a prolific writer with passion for the unusual. I believe the bizarre world is always exciting so keeping you up to date with such stories is my pleasure
Previous Is Michael Jackson Still Alive? Conspiracy theories Claim King of Pop’s death certificate mismatch ‘proves he is NOT dead’
Next Man Chops Off His Nose And Ears To Look Like Living Human Skull