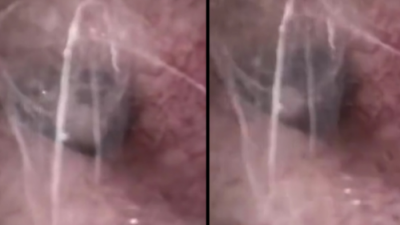 This is a finding that stunned everyone, including the doctors in-charge of the case.

A Chinese man went to hospital to find out why the heavy pounding he has been feeling in his left ear for quite a while would not stop. He was stunned when doctors revealed to him that a spider was spinning webs in his ear.

It was discovered that the noise was being caused by a spider spinning webs deep inside his ear canal.

Doctor Cui Shulin, deputy chief physician at the department of otolaryngology at the Dalian Central Hospital, in Dalian, China’s Liaoning province, recently told reporters that the unnamed patient, a man in his 60s, had come to the hospital to complain about a drum like sound and a tingling sensation in his left ear.

When the patient presented his case, doctors decided to investigate, but already suspected that a cricket or flying insect had somehow become stuck in the man’s ear. What they did not expect to find was a spider weaving cobwebs.

“I felt uncomfortable sensation in my ear when I went to sleep last night, but I didn’t pay too much attention to it.. When I woke up this morning, the sensation was still there, but now there was also a drumming like sound,” the patient told doctors at Dalian Central Hospital.

Using an endoscope to inspect the man’s inner ear canal, Doctor Cui Shulin was surprised to see that about 5 cm into the canal, there was a fog-like white barrier, and past it a moving creature that retreated deeper into the ear as the endoscope advanced.

“This seems to be a spider!” Dr. Cui said, and his words shocked both the patient and the medical staff in the room. After calming the man down, the doctor used a special syringe to flood the ear canal with water and flush out the spider. After examining the man’s ear canal again, doctors established that his hearing hadn’t been affected.

Saxon is a prolific writer with passion for the unusual. I believe the bizarre world is always exciting so keeping you up to date with such stories is my pleasure
Previous Bride-To-Be Cancels Wedding After Guests Refused To Pay $1,150 Attendance Fee
Next Best Graduating Student In Varsity Gets Yam tuber, Live Chicken as Reward