This artist has produced an incredibly exceptional piece. He carved the statue of Arnold Schwarzenegger from only a single tree trunk. It is an intimidating life-size image of the legendary actor. 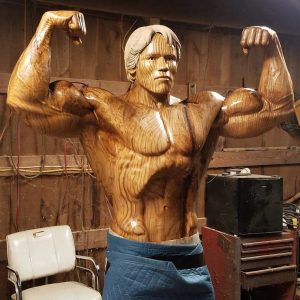 Wood sculptor James O’Neal, carved this statue of Schwarzenegger out of a single black oak trunk. It stands at 1.88 meters, and took O’Neal six months to complete. It bears an uncanny resemblance to Schwarzenegger in his prime years, when he won back to back Mr Olympia titles. From his signature vacuum pose, to his 70’s hairdo and even the veins on his arms, the sculpture captures the look of Arnold Schwarzenegger almost to perfection. 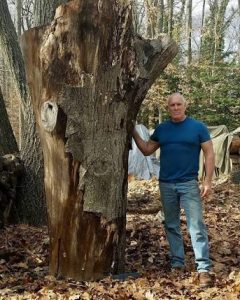 The entire process of shaping the black oak trunk into an ultra-realistic sculpture of the bodybuilding legend was documented on James O’Neal’s Instagram.
“This piece of black oak has the craziest grain of anything I’ve ever carved,” O’Neal wrote. “Burls, knots, bark, bug tunnels, and grain that changes direction every few inches. Arnold fans will probably feel it interferes with the statue, but this piece is why I carve trees. So much character, and after all, Arnold is the Austrian Oak.” 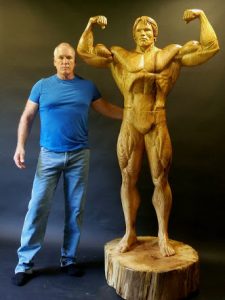 O’Neal has some other good wood sculptures including sculptures of boxers Muhammad Ali and Floyd Mayweather, as well as UFC superstar Connor McGreggor. But his detailed finishing touches on this life-size sculpture of Arnold makes this easily his greatest work yet.
O’Neal is truly a unique wood sculptor. 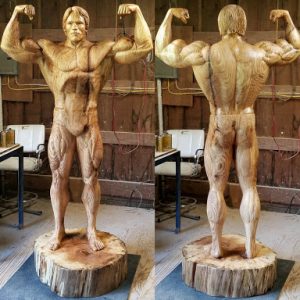