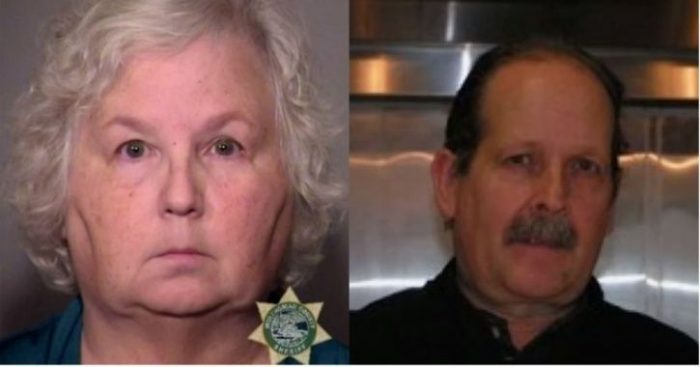 An Oregon romance Novelist, Nancy Crampton-Brophy, has been arrested and charged with murder of her husband of 27 years, Daniel Brophy, who was found shot dead in his office.

In 2011, Nancy Crampton-Brophy published a how-to-do-it article on  WordPress entitled, “How to Murder Your Husband.”

“As a romantic suspense writer, I spend a lot of time thinking about murder and, consequently, about police procedure,” the article began.

In June of this year, Crampton-Brophy’s own husband of 27 years, 63-year-old Daniel Brophy, was found shot to death at the Oregon Culinary Institute where he worked.

Three months later, Crampton-Brophy, 68, was arrested in connection with his death.

According to a criminal complaint from the Circuit Court of the State of Oregon, Crampton-Brophy has been charged with murder and the unlawful use of a weapon.

“Based on information learned during the investigation, detectives believe Nancy L. Crampton-Brophyis the suspect in Daniel C. Brophy’s murder,” a release from the Portland Police Bureau read.

Neither the release nor the criminal complaint stated a suspected motive.

CNN has reached out to Crampton-Brophy’s attorney for comment. Her next court appearance is scheduled for September 17.

The steamy, sinful plots of Crampton-Brophy’s books, along with her on-the-nose treatise about spousal homicide, add a bizarre twist to the case.

The “How to” essay was published on a blog called “See Jane Publish.” The blog has since been made private, but The Oregonian reports the glib, 700-word write was split into sections detailing the pros and cons of husband homicide.

“Divorce is expensive, and do you really want to split your possessions?” Brophy reportedly wrote.

Among her many works, Brophy published a series of books with the tagline, “Wrong Never Felt So Right.” They include tales of attempted murder, infidelity, crime and general debauchery — all common themes for romantic suspense novels.

“Writers are liars,” Brophy says in a bio on her author website.

“I don’t remember who said that but it’s not true. In writing fiction, you dig deep and unearth portions of your own life that you’ve long forgotten or had purposely buried deep. Granted, sometimes it is smarter to change the ending. ”

Saxon is a prolific writer with passion for the unusual. I believe the bizarre world is always exciting so keeping you up to date with such stories is my pleasure
Previous Chiefs In Malawi Want Mini-Skirts Banned In Secondary Schols
Next Korean Man Raises 21 Ducklings As His Own Children, They Now Follow Him Wherever He Goes (Watch Video)