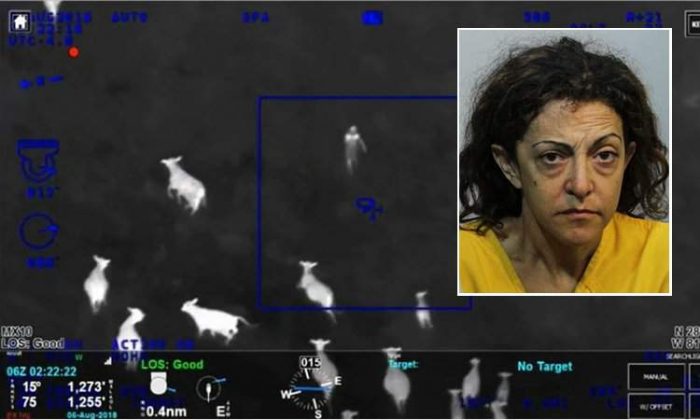 A suspect running away from police has been cornered into custody after a herd of cows joined in the chase.

Florida sheriff’s office got an unusual assist in corralling a suspected car thief.

A group of cows decided to chase down and herd the woman into custody after she invaded their field.

Sanford police said they spotted a stolen Subaru SUV on Aug. 6 and gave chase. The driver, identified as 46-year-old Jamie Young, made it to nearby by Brevard County before hitting a stop sign and ending up in a ditch.

According to police, Young and her passenger Jennifer Kaufman decided to make a run for it. Young was found hiding in some bushes nearby and arrested with the help of K-9s.

Kaufman took off on foot and ran into a nearby pasture, which ended up being a big mistake.

The Seminole County Sheriff’s Office helicopter team was able to track her running through the cow pasture where she ran into some upset bovines.

In the aerial video recording, the pilot tells Sanford police that “for a good visual” on Kaufman, look for the “large group of cows” chasing the suspect.

The chopper hovering above watched as Kaufman ran across the field with about 20 charging cows on her tail. “They panicked. The cows were nervous. That would make me panic — if all those big cows come running at you. They didn’t know them. They don’t know if they’re there to hurt them, or steal one of the babies,” pasture owner Richard Kondracki told WKMG.

The Seminole County Sheriff’s Office also gave the cows some kudos on social media after the second woman was taken into custody.

Saxon is a prolific writer with passion for the unusual. I believe the bizarre world is always exciting so keeping you up to date with such stories is my pleasure
Previous Ten Men You Would Never Believe They Exist! Watch Unbelievable Video
Next Do You Know That Two Men With The Darkest And Lightest Skin Colour On Earth Are Both Black Men?