Home / Europe / Korean Man Raises 21 Ducklings As His Own Children, They Now Follow Him Wherever He Goes (Watch Video)

Korean Man Raises 21 Ducklings As His Own Children, They Now Follow Him Wherever He Goes (Watch Video) 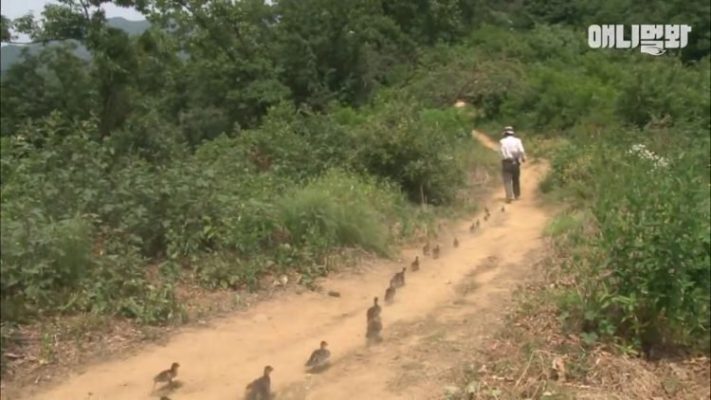 A South Korean man is currently buzzing the internet after posting video of himself being followed by 21 ducklings he has been raising as his children ever since they hatched. The viral video shows the cute birds following their “mother” on a mountain hike and listening to his every command. The man trained the ducklings to bond with him and they now follow him wherever he goes.

Reports say the man kept the eggs warm until they hatched, which explains the attachment of the ducks.

As reported by Good Times, the ducklings follow their owner on outdoor activities which also includes hiking rough terrains and slopes. The middle-aged Korean owner raised his 21 ducklings likes his own children and still personally looks after their well-being.

When he first began to take his ‘buddies’ on hiking trips, he wasn’t sure if they would survive.

However, the ducklings did not have anything to rely on and the owner decided to train them to follow a route between his house and the forest.

The video shared online shows the ducks only respond to the man’s call and he is a certified father of the ducklings.

Saxon is a prolific writer with passion for the unusual. I believe the bizarre world is always exciting so keeping you up to date with such stories is my pleasure
Previous Woman Arrested Over Husband’s Murder After She Published Article Entitled ‘How to Murder Your Husband’
Next Man Steals 73 Wedding Gowns To Feel He Was Getting Married To Another Woman