Best Student In Advertising Gets 18 Cups Of Beans, Pawpaw, Yam Tuber and Handshake From SUG President

A female student of the Department of Mass Communication, Chukwuemeka Odumegwu University (COOU), Ezinne Okeke, has received award as the best student in creative advertising in the 2018 session.

Okeke was given 18 cups of beans, pawpaw and one yam tuber as prize for the award, including a certificate of excellence. She led a team that produced an outstanding poster on a fruit juice brand which was selected as the best  by a number of judges who assessed a creative advert competition involving 150 students. Okeke was the creative concept originator in her team,  making her outstanding amongst others.

Okeke was honoured with 21 other students who distinguished themselves in the creative advert competition.

The award was organised by massmediang.com, an online news platform that celebrates excellence in communication education especially among students. 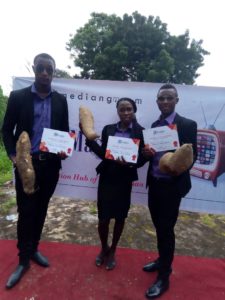 Certificates were Presented to the awardees by the President of Students Union Government (SUG) of the institution, Comrade Benneth Udochukwu.

Comrade Udochukwu expressed delight at the fact that students were being honoured by their lecturer for doing well in class. 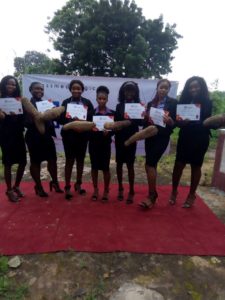 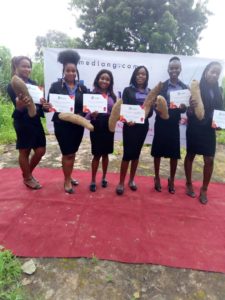 Earlier today, six part time students of the department were also honoured for excellence in television broadcasting. The overall best student, Ogechukwu Okonkwo, was given one tuber of yam and pawpaw as prize for emerging tops among others. Others that were honoured are Mary Ijoba, Obediah Udubrai, Chinwe Ikemka, Paul Agaba, and Obikaigbo.

Saxon is a prolific writer with passion for the unusual. I believe the bizarre world is always exciting so keeping you up to date with such stories is my pleasure
Previous Five Squirrels Freed After Their Takes Got Entangled In Mother’s Nest
Next Woman Falls To Death From Dangerously High Rock While Taking Selfie