A Chinese farmer has become an internet sensation after she used 40 discarded cement bags to make a wedding dress for herself.

The woman, 28-year-old Lili Tan, has never taken fashion design courses, and spends most of her time farming, not creating wedding gowns, but looking at the amazing dress she created on a rainy day, when she couldn’t work in the fields, you would think she makes dresses and accessories for a living.
Using 40 discarded cement bags, the contents of which had gone toward renovating her village house near Longnan city, in China’s Gangsu province, Tan was able to create an elaborate wedding dress like the ones she saw in magazines, an impressive train for it, as well as a fancy hat. She showed them off on social media in a video which instantly went viral with several millions of views. 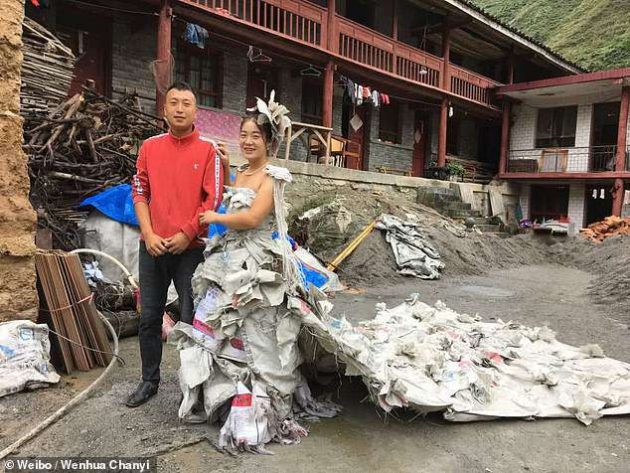 “I did not expect the overwhelming response online, it’s such a nice surprise,” the amateur fashion designer told Pear Video, jokingly adding that “I could probably get more likes and views online if I were prettier”.

Even so, the 28-year-old’s video got over 5 million views in China and is now doing the rounds on western social media as well. People just can’t get enough of her cement bag dress and accessories, and the fact that she created them all in just three hours, out of boredom, because it was raining and she couldn’t work the fields just adds to their charm.
You need to note that Lilil Tan will not be using her unusual wedding dress at her own wedding, as she has been happily married since 2012, and also has a son.

What do you think about this wedding gown?

Saxon is a prolific writer with passion for the unusual. I believe the bizarre world is always exciting so keeping you up to date with such stories is my pleasure
Previous Have You Tasted A Plate Of Lucifer’s Fingers Before? See Rare Sea Food Very Popular In Portugal (Watch Video)
Next ‘Dead Body’ Found In Forest Turns Out To Be Sex Doll, Police Say