Home / Europe / See The Most Expensive Bottle of Whisky In The World! It Costs N396 Million

See The Most Expensive Bottle of Whisky In The World! It Costs N396 Million

A bottle of Macallan Valerio Adami whisky costs $1.1 Million (about N396 Million). It just shattered the record previously held by another Macallan bottle of scotch which sold for $1 Million last May.  This record was broken on Wednesday. 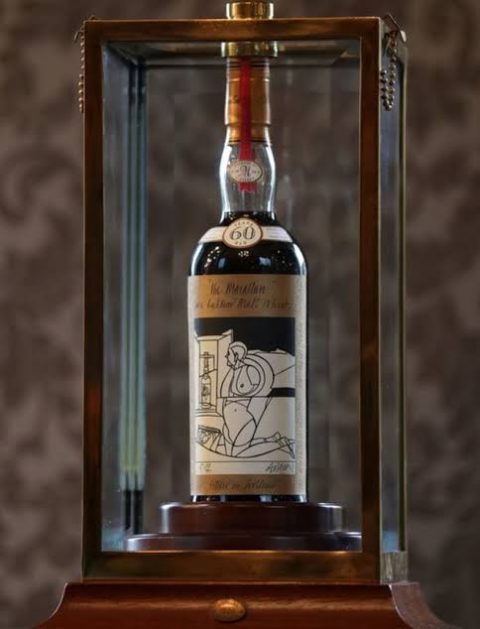 Macallan Valerio Adami bottle of whisky was just sold in an auction in Edinburgh, Scotland. The 60-year-old bottle of Whisky fetched a world-record price of $1.1 million at a Bonhams’ whisky sale Wednesday.
The whisky was distilled in 1926 and bottled in 1986.
The bottle was designed by artist Valerio Adami as an extremely limited edition. The buyer is a U.K.-based whisky connoisseur who was in a taxi in Italy when the hammer came down, the Telegraph reports.
This particular whisky bottle which sold for $1,101,729 is significant because of its blend of rarity, vintage look and artwork, experts say.
“The Macallan 1926 60-year-old has been described as the Holy Grail of whisky,” Bonhams whisky specialist Martin Green said in a release. “Its exceptional rarity and quality puts it in a league of its own, and the world’s most serious whisky collectors will wait patiently for many years for a bottle to come onto the market.”
“All the appeal of Scotch whisky — the myth, the tradition and the romance — find its ultimate expression in this bottle,” said renowned international whisky consultant Charles MacLean.
The bottle is one of only a dozen with its design in the world. It isn’t known how many are still intact, but at least two of the 12 have been lost –– one to an earthquake in Japan in 2011 and another to consumption, according to Bonhams.
Another bottle of Macallan was sold last May by an auction house in Hong Kong for $1,057,442.37, the previous record for a bottle of Scotch.

Saxon is a prolific writer with passion for the unusual. I believe the bizarre world is always exciting so keeping you up to date with such stories is my pleasure
Previous See Shopping Malls In China Where Lonely Female Shoppers Can Rent “Shopping Boyfriends” Just To Shop For An Hour
Next Dozens Of Cows Run Free On Highway As Truck Carrying Them Overturns