Here’s how it works. It’s an electronic collection plate which has a spot where you swipe your card to make a payment, just like numerous churches in Africa and other parts of the world that use POS for tithe and offering collections. 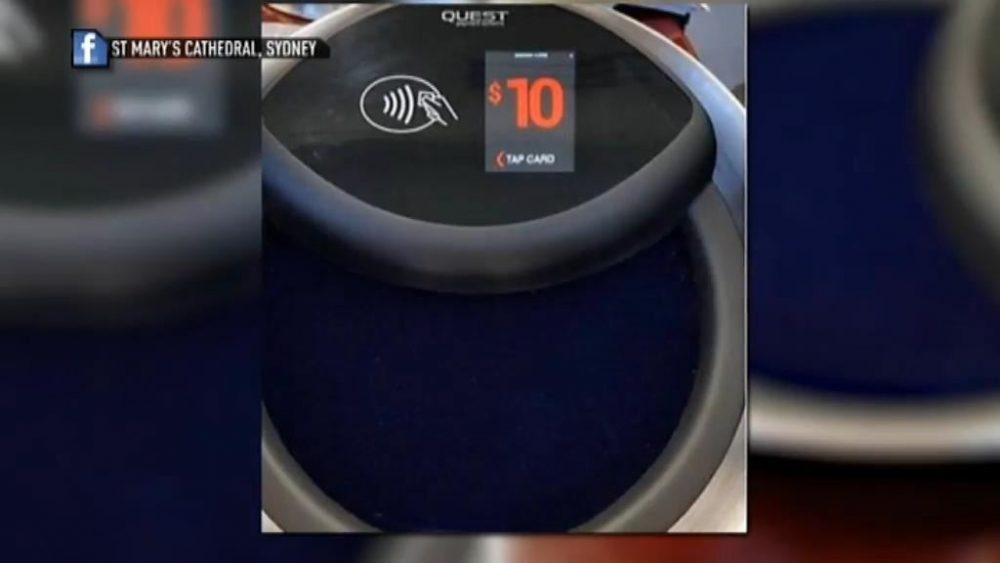 The difference here is that the electronic plate is programmed to accept a minimum of $10 (about N3,600). This is what actually caused the outrage on social media with some comments condemning the innovation, though some others applauded it.

So if you come to church without cash and you want to use your chip-enabled credit card for payment, you must pay a minimum of $10 or you sit back without giving offering for that Sunday.

St. Mary’s Cathedral in Australia took the heat for implementing a “tap and go” collection plate which the Church announced on its Facebook page.
These device allows parishoners to tap their chip-enabled credit cards and pay a certain amount.
The Roman Catholic cathedral in Sydney, after announcing the innovation on its Facebook page, deleted soon after due to heavy public outcry ― though, as always, someone took a screenshot.
“Multiple payments of $10 can be made by tapping your card once with several seconds in between each transaction,” St. Mary’s said in the post.

The response was certainly not all negative, and seemed more focused on the minimum donation being set at $10.

“If you had made it [a] $2 minimum we probably wouldn’t be having this conversation,” said one Facebook user.

“I hate it when I turn up to mass and realise I don’t have any cash,” another user said in support. “I would love this option at my parish.”

St. Mary’s followed up on the outcry by thanking those who made “rational and coherent comments” about the new collection plates.

Saxon is a prolific writer with passion for the unusual. I believe the bizarre world is always exciting so keeping you up to date with such stories is my pleasure
Previous Bus Driver Suspended For Letting His Monkey Drive (Watch Video)
Next State In USA Declares October 6 “Wizkid Day”