A Russian man who chose an unbelievably bizarre therapy to improve his breathing has miraculously survived.

Yury Zhokhov, a 41-year-old factory worker from Donetsk inserted an 8-inch knife into his head when he felt he could not breathe better through his nose. The man told police that he was trying to make another hole so he could breathe better. 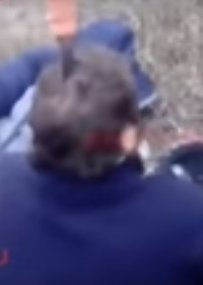 Last week, police in the town of Donetsk, Russia’s Rostov region, found a local man kneeling by himself in a field with a knife handle sticking out of the top of his head. The 8-inch blade was almost completely buried into his skull, but the man was fully conscious and did not appear to have sustained any serious brain damage.

A policeman who was stunned by the incident asked him who had stuck the knife into his head. The man calmly said that he was having trouble breathing through his nose, so he used the knife to make another hole to breathe through. He then added the knife got stuck and he couldn’t get it out.

“My brain is not breathing, that’s why the blade stuck in my head,” the man said.

“Don’t touch, don’t touch,” a bemused police officer can be heard instructing the strange man in a video that has been doing the rounds on Russian social media since last week. “Sit as you are, do not move….do not bend your head.”

The man, identified as 41-year-old Yury Zhokhov, a factory worker from Donetsk, was carefully transported to a local hospital, where shocked doctors didn’t dare touch the knife for fear that any movement of the blade would kill the man or cause irreparable brain damage.

“It was horrific. Even our experienced nurses, who have seen so much, still cannot get over it,” an Emergencies Ministry spokesperson told reporters. “The X-rays were made showing the blade was exactly between the two hemispheres of the brain. Local doctors did not dare pull it out. They called the regional hospital, and asked them to send specialists for help.”

Neurosurgeons from the regional capital of Rostov-on-Don were brought in to remove the knife, and Zhokhov miraculously survived the procedure. However, doctors say that he remains in “critical” condition due to the increased risk of infection inside the brain.

Zhokhov is expected to remain in intensive care for a week, after which he will be transferred to a psychiatric facility.

Saxon is a prolific writer with passion for the unusual. I believe the bizarre world is always exciting so keeping you up to date with such stories is my pleasure
Previous The Most Expensive Face Cream In The World Costs N500,000
Next Man Divorces Wife After Seeing Her With Another Guy On Google Map Street View