The Brexit saga has taken another dimension as dogs and their owners embarked on a protest march, demanding an end to the policy.

About a thousand dogs and their owners marched on Britain’s parliament on Sunday demanding an end to Brexit via a second vote on the terms of the country’s exit from the European Union.
The protest march what premised on what organisers called
the “Wooferendum” campaign. They argued that animals would suffer from leaving the EU, saying there would be a shortage of vets and a rise in pet food costs. 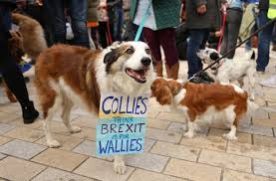 Bulldogs, both English and French breeds, were among those walked through central London to Parliament Square. One grey Schnauzer wore a homemade banner declaring “Brexit’s Barking Mad.”

The march backed a wider campaign for a ‘People’s Vote’ on Brexit, at which Britons would have the chance to vote on whatever Brexit deal Prime Minister Theresa May is able to bring back from Brussels.

At several ‘Pee Stations’ along the route, dogs were encouraged to urinate on images of Brexiteers like former foreign minister Boris Johnson and ex-UK Independence Party leader Nigel Farage – key faces in the 2016 Brexit referendum campaign.

Saxon is a prolific writer with passion for the unusual. I believe the bizarre world is always exciting so keeping you up to date with such stories is my pleasure
Previous Activist claims Arkansas sheriff’s office is dressing inmates in Nike shirts for their mug shots
Next See Chinese Highway Interchange That Looks Like A Giant Rollercoaster (Video)