After recovering a stolen doughnut van from where it was abandoned, the police decided to share the snacks with the homeless. 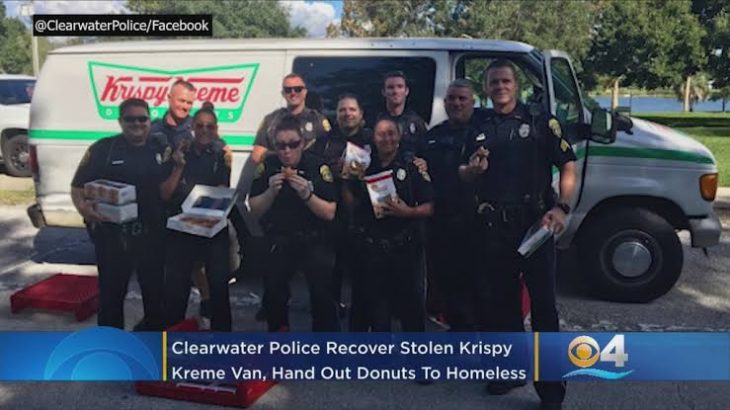 Florida police officers who recovered a stolen van filled with Krispy Kreme doughnuts decided to share it with the homeless. They kept some for themselves and handed the rest over to the homeless.

Clearwater police posted a photo on Facebook of a group of officers standing in front of the van holding boxes of the tasty treats.
The Tampa Bay Times reports the van was reported stolen Tuesday morning in Lake City, which is 193 miles (310 kilometers) north of Clearwater. The van, loaded with doughnuts, was spotted in Clearwater on Tuesday afternoon.

The Facebook posting says the store manager donated the cargo to the officers. They saved some doughnuts to eat and handed out the rest to the area’s homeless.

Authorities are still looking for the van thief.

Saxon is a prolific writer with passion for the unusual. I believe the bizarre world is always exciting so keeping you up to date with such stories is my pleasure
Previous Zombie Dance! See Climate Change Message Sent To Donald Trump By COOU Students (You Can’t Miss This Video)
Next Student Allegedly Gives Classmates Cookies Made With Dead Grandparents’ Ashes