Man Falls Into Mine Shaft Full Of Rattle Snakes, Rescued After Three Days With Broken Legs

A man has survived a nightmare after falling into a mine shaft containing a lot of rattle snakes, breaking two of his legs, and rescued after three days. He managed to kill three of the snakes. 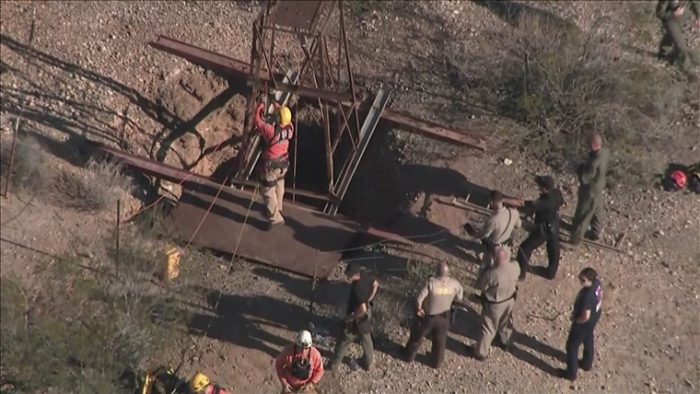 The 62-year-old man was rescued from the depths of an Arizona mine shaft Wednesday — two days after he plunged into the pit and began an ordeal during which he nursed his numerous injuries while simultaneously fending off a trio of rattlesnakes, officials said.
The man identified as John Waddell was lifted out of the 100-foot-deep shaft Wednesday after his friend, Terry Schrader, heard Waddell hollering near Eagle Eye Road and milepost 13, located about 35 miles south of Aguila, Arizona, FOX10 Phoenix reported.

“He called me Monday and told me he was coming to the mine,” Schrader told FOX10. “We always had a deal: if he is not back by Tuesday, [come look for him] because he said he would be back Tuesday.”

Schrader added: “I didn’t come down Tuesday, I did today [Wednesday]…I was afraid of what I was going to find.”

Schrader said he drove to the mine shaft area and soon heard the sound of his friend screaming.
“As I pulled out my truck I could hear him hollering, ‘Help, help!’” Schrader said. “I did get enough [cellphone service] that the deputies were on their way.”

When Waddell plummeted into the shaft Monday, he broke both his legs. Worse, as he lay helpless, he suddenly discovered several rattlesnakes were slithering around him. Waddell said he managed to kill three of the serpents during the trying two days underground, all the while hoping someone would eventually hear his cries for help.

Rescuers spent nearly six hours to pull Waddell out of the shaft to safety and then to airlift him to a hospital.
Waddell’s injuries were not life-threatening, though he was rescued severally dehydrated and with broken legs, FOX10 reported.

Saxon is a prolific writer with passion for the unusual. I believe the bizarre world is always exciting so keeping you up to date with such stories is my pleasure
Previous Python Falls Through Ceiling Into Bank During Staff Meeting (Watch Video)
Next High School Superintendent In New Jersey Arrested For Defecating On Football Field ‘Everyday’, Suffers From Chronic Runners Diarrhea