A Chinese woman got more than the fun she set out to get after she was left with paralyzed fingers as a result of playing video games on her cell for straight one week. While she was catching fun her fingers were ‘losing sleep’. Now she can’t stretch the fingers on her right hand. Doctors are advising that people obsessed with their smart phones should learn to take a break while from time to time to stretch their fingers. 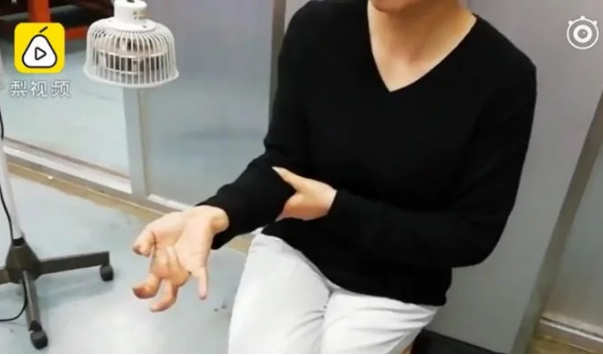 The Chinese woman found herself unable to use the fingers on her right hand after spending her entire week-long vacation playing video games on her smartphone.

The unnamed woman from Changsha, in China’s Hunan province, reportedly took a week off from work and spent all that time playing on her smartphone.

According to a Pear video documenting her bizarre case, the only time she put down her phone was when she slept. After a few days, she started experiencing severe pain her right hand, but she kept playing until her fingers became stuck in smartphone-holding position and she found herself unable to flex them at all.

It was only after her the fingers on her right hand became completely paralyzed that the woman sought medical attention at a local hospital. After doctors examined the patient’s deformed hand and ran some tests, they diagnosed her with tenosynovitis, an inflammation of the fluid-filled sheath (called the synovium) that surrounds the tendons.

Tenosynovitis is usually caused by immense strain from overuse or repetitive usage of a particular joint, and in this particular case it was the result of the woman clasping her phone for many hours on end, several days in a row.

Luckily for this avid gamer, doctors were able to administer a treatment and she soon regained full control of her fingers. It’s unclear whether she started playing on her phone again as soon as that happened…

Doctors warned that the symptoms of tenosynovitis can vary on a case by case basis, and advised people obsessed with their smartphones to put them down from time to time and give their joints a chance to relax.

Saxon is a prolific writer with passion for the unusual. I believe the bizarre world is always exciting so keeping you up to date with such stories is my pleasure
Previous See New Mobile Game Called “Follow To Jesus and Go” Where Players Meet Biblical Characters (Video)
Next ‘Kind’ Shop Owner Tells Robbers To Come Back Later If They Want More Money, They Return, Get Arrested