This could be regarded as evidence of football witchcraft in Africa.

Fans in Zambia were stunned after a footballer was caught walking around naked in opponent’s dressing room. 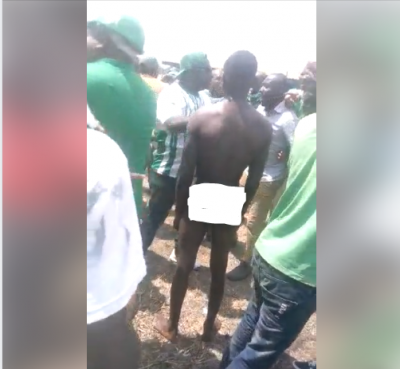 The player was almost mobbed after incident attracted a huge crowd of football supporters who quickly gathered at the scene.

The footballer for Chambeshi football club in Zambia was on Sunday afternoon (yesterday) caught naked in the Mighty Mufulira football team’s dressing room just when the two teams were about to a match.

The player who was almost mobbed – was handed over to the police by angry crowd who attributed the act to witchcraft/diabolism.

According to the club supporters, the act is related to football witchcraft which has been going on in African football for years.

The chaotic moment after the naked footballer was caught, was filmed and posted online in a video which has gone viral.

Saxon is a prolific writer with passion for the unusual. I believe the bizarre world is always exciting so keeping you up to date with such stories is my pleasure
Previous Woman Who Gave ‘Wine’ To Toddler In Viral Video Gets Death Threats (Watch Video)
Next Serial Thief Nabbed After Paying Prostitute With Stolen Goods