95-Year-Old Man Wakes Up At His Own Funeral

There was momentary commotion in India after a 95-year-old man who was recently declared dead by a doctor after he fainted in the North West Region of Rajasthan, woke up at his funeral.

When news of Budh Ram’s death broke, his family immediately made preparations for his funeral. As his funeral rites began, Budh reportedly woke up to the shock of everyone. 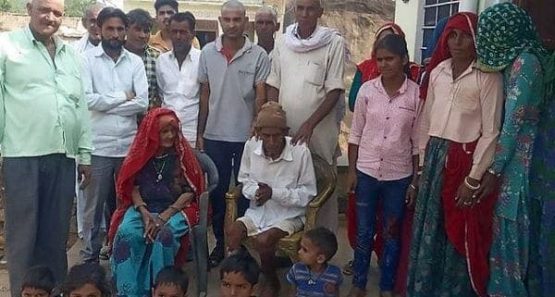 Balu Ram, his eldest son, said the family was preparing the customary bath to clean the body before the funeral when his father started shivering.

He added that, his father woke up as soon as water was poured on his chest and started breathing heavily. His 65-year-old son described it as a miracle. He said: “He started breathing and sat on the bed soon after.

When his relatives asked him what happened, Budh said he had suffered chest pain and slept. It is nothing but a miracle.” Another son identified as Ranjit Ram described what happened as a very happy moment for him and the family.

The 55-year-old man said: “This is a very happy Diwali for us. Had my father been dead, we wouldn’t have celebrated the festival as is the norm in any house where a death has occurred. But this time, the celebrations are going to be grand.”

(With reports from Yen)

Saxon is a prolific writer with passion for the unusual. I believe the bizarre world is always exciting so keeping you up to date with such stories is my pleasure
Previous Chinese Company Under Fire For Forcing Employees To Eat Cockroach, Drink Urine, Sell Condom, Get Flogged (Watch Unbelievable Video)
Next Slayqueen Runs Mad After Taking A Mixture Of “Colorado And Black Mamba” (Video)