A Chinese company is currently under fire for adopting extreme measures to punish sales representatives who could not meet their targets. Some of the sales reps were flogged while some others were forced to eat cockroach, drink a liquid alleged to be urine, or even sell condom or sanitary pad in the streets. The video was secretly recorded and posted online as a result of which three managers of the company were arrested. 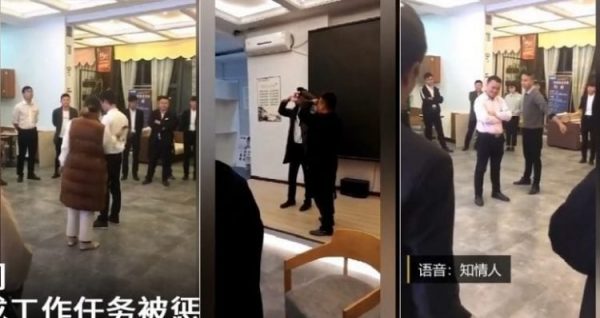 The company is a home improvement firm in Zunyi, China.

Three managers of the company were recently arrested for subjecting employees to that extreme punishment.

The arrests came after an employee of the unnamed company took to social media to complain about the humiliating punishments he and his colleagues were being subjected to by management for failing to reach their goals.

His post included a video of a topless man standing in a center of a room and being whipped with a belt by his boss, while his workmates watched. Footage also shows people drinking cups of yellow liquid which some have alleged is urine, reports Oddity Central.

Though the video was later deleted, screenshots had already started circulating online, and the police were notified about the troubling punishments.

“If the sales goal has not been met by the end of this month, the team leader will have to eat three cockroaches for each failed sale,” one of the threatening text messages sent by managers and published by local newspaper Zunyi Yaowen read. Other text messages revealed several cruel punishments devised by the firm’s managers, including drinking vinegar or toilet water, selling condoms and sanitary pads on the street and having their head shaved.

While most social media users declared themselves shocked and horrified by these revelations, others simply asked why employees didn’t simply quit and looked for jobs elsewhere. However, a member of the company’s staff told Pear Video that many employees were owed two months’ pay, and management had already threatened to reduce their severance pay if they dared quit.

According to a statement posted by Zunyi police on Weibo, two of the managers have been jailed for 10 days, while a third manager will spend five days behind bars.

Chinese companies are notorious for handing out extreme punishments to staff who fail to meet targets.

Saxon is a prolific writer with passion for the unusual. I believe the bizarre world is always exciting so keeping you up to date with such stories is my pleasure
Previous Mum Finally Stops Breastfeeding Daughter At The Age Of Nine
Next 95-Year-Old Man Wakes Up At His Own Funeral