If you always travel to China and stay in five star hotels, you should be interested in this story.

A number of five-star hotels have apologized to the public as a result of outrage caused by videos showing how tagged of the hotel use dirty towels to clean cups, plates and toilet seat. 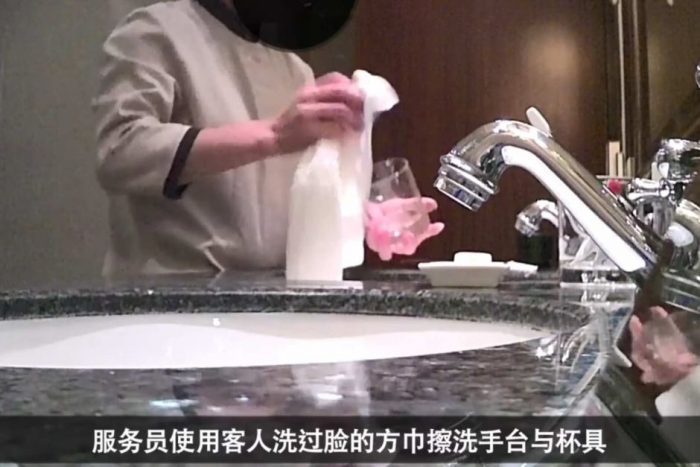 The hidden camera footage showed cleaners at more than a dozen five-star hotels in China using dirty towels to clean toilets, cups and showers, sparking outrage on Chinese social media.
The 12-minute video was posted to the popular Chinese social media site Weibo.
The footage showed cleaning staff washing cups and mugs with the same sponge used to wipe down the shower and sink.

Eleven of the 14 hotels involved have apologised since the video went viral, and China’s Ministry of Culture and Tourism has ordered investigations into the apparent breaches of hygiene standards.

Major international hotel chains have been caught up in the scandal, including the Waldorf Astoria in Shanghai and the Park Hyatt in Beijing, which have both since apologised.

The blogger who posted the video, under the pseudonym Huazong, said he had spent more than 2,000 nights in 147 five-star hotels across several major Chinese cities.
In one section of the video, which is captioned in Chinese, he criticises a cleaner for washing dishes with a cloth that had been stored next to a used toilet-scrubbing brush.

The captions indicated that the incident was filmed at the Le Royal Meridien Shanghai, and that he had paid 1,600 yuan ($317) a night for the room.

The clip has been shared more than 80,000 times online and a topic section on Weibo dedicated to the video has been clicked on 99 million times.
Others pointed out that hygiene at hotels was an ongoing concern for locals — but said it was surprising to this sort of behaviour at luxury hotels.

“Everyone knows about it, the hotel has high and low levels. But some people have no bottom line,” said another Weibo user.
Seven of the hotels filmed were in the city of Shanghai, where the local tourism authority is conducting investigations into the issues raised in the video, according to the state-owned Global Times newspaper.

“The hotels involved will be dealt with in a strict manner upon investigation,” the Global Times reported.

Saxon is a prolific writer with passion for the unusual. I believe the bizarre world is always exciting so keeping you up to date with such stories is my pleasure
Previous Couple Who Can’t Smile Due To Rare Condition Fall In Love After Meeting Online
Next Outrage As Rare White Lion Might Be Auctioned Off ‘To Be Shot By Trophy Hunters’