A wildfire expert has said that a rare, two-headed snake found several months ago in Virginia near the nation’s capital has died. 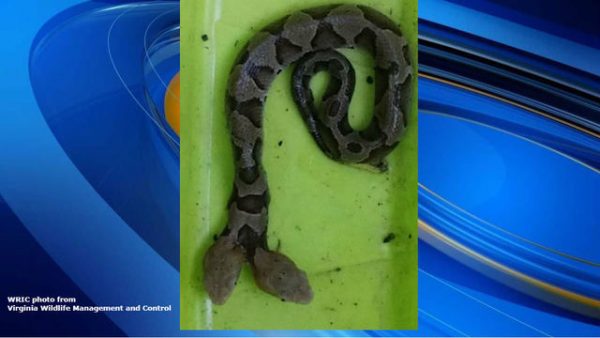 The Washington Post reports state herpetologist JD Kleopfer said in a Facebook post this week that the snake had died. He says it passed away peacefully last week for no apparent reason, and was discovered dead one morning.

The Copperhead snake was found in a northern Virginia neighborhood in September.

The Wildlife Center of Virginia previously said in a statement that an examination of the reptile found it had two tracheas and two esophagi, but shared one heart and a set of lungs. Biologists believe both heads were capable of biting and distributing venom.

Kleopfer says two-headed snakes are rare because they don’t live long in the wild.

Saxon is a prolific writer with passion for the unusual. I believe the bizarre world is always exciting so keeping you up to date with such stories is my pleasure
Previous Monkey Snatches Baby Boy From Mother’s Arms, Bites Him To Death
Next Man Walks Into Police Station With Human Leg, Says He Is Tired Of Eating Human Flesh