The “Pink Legacy” Diamond has set a new world record after it was sold for more than $50 million.

Christie’s sold the “Pink Legacy” diamond at auction Tuesday for more than $50 million including fees, saying it’s a new world record price per carat for a pink diamond, report’s cbsnews . 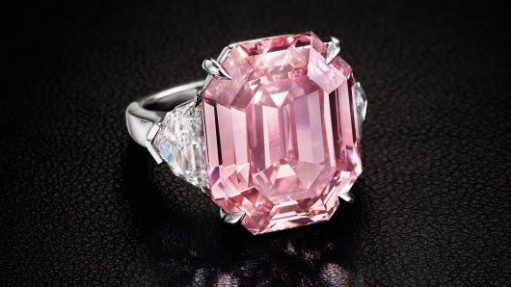 Christie’s said that renowned jeweler Harry Winston was the buyer. The auction house had expected to fetch $30 million to $50 million for the nearly 19-carat, rectangular-cut stone, the largest fancy vivid pink diamond that it has ever put under the hammer.
It was the standout offering at Christie’s fall jewelry auction in Geneva. The standing-room only ballroom broke into applause after the auctioneer struck down a hammer price of $44.5 million. That excludes the standard “buyer’s premium” and other fees.

The stone once belonged to the Oppenheimer diamond family, and Christie’s says it’s among the most chemically pure gems.

Rahul Kadakia, Christie’s head of international jewelry, said that auction house has only sold four diamonds weighing more than 10 carats of the same color in its 251 years of history.

Christie’s sale kicks off two days of jewelry auctions in Geneva. On Wednesday, Sotheby’s will auction jewelry once owned by French Queen Marie Antoinette that hadn’t been seen in public for 200 years.
They include a monogrammed diamond ring along with a lock of her hair, earrings and a rare drop pearl with a starting price of $1 million.
The pieces were smuggled out of France before her failed attempt to escape the French Revolution, which began in 1789.

“I think she probably was one of the original, you know, the original ‘it girl’. Honestly, in terms of her style and her relationship to fashion and jewelry,” Frank Everett, vice president and sales director for Sotheby’s jewelry, told “CBS This Morning” last month.

Saxon is a prolific writer with passion for the unusual. I believe the bizarre world is always exciting so keeping you up to date with such stories is my pleasure
Previous Dog Causes Traffic On Highway, Bites Police Officer TryingTo Get It Off The Road
Next Single Mum Has Been Paying An Actor To Pose As Daughter’s Dad For The Last 10 Years