A woman desperate to be sure that her daughter does not lose her fatherly love has been keeping an actor in a pay roll to pose as her daughter’s dad. 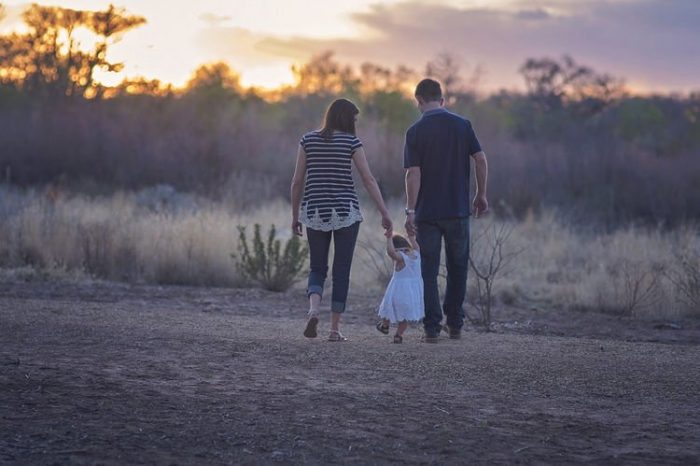 The Japanese single mum took the measure to prevent her daughter from being ostracized by other children for not having a father.
Megumi was only a baby when her parents separated and her father disappeared from her life. The mother, Asako, remembers that the girl started asking where her father was very early, but that her father’s absence didn’t seem like a big deal until she was about 10-years-old. That’s when Asako noticed a change in her daughter’s behavior; she stopped talking to her, became withdrawn, and eventually stopped going to school. Her mother soon learned that she wasn’t just blaming herself for her father’s absence, but she had also become a victim of bullying at school, as it often happens with children of single parents in Japan.
Asako was heartbroken, and after appealing to Megumi’s teachers for help, she also decided to give her daughter the thing she wanted most, even if it meant lying to her.
Asako had heard about people rental agencies that could send actors to play fake relatives, wedding guests and even romantic partners, for a fee, so she started flirting with the idea of renting someone to pose as Megumi’s estranged father. She auditioned five candidates and settled on Mr. Takashi, who she found to be easy to talk to and kind. He ran his own rental agency with a staff of around 20 and about 1,000 freelancers able to take on whatever role and personality the client’s needs required.

An actor by training, Takashi had already played boyfriends, businessmen, friends and fathers, and even a groom at several fake weddings, so posing as a girl’s father didn’t seem that complicated at the time. He met with Asako several times to understand what was required of him and also studied several Hollywood films to prepare for his role.

Asako then told her daughter that her father had remarried and now had another family, but that he had recently contacted her because he wanted to meet Megumi. At first, the girl was shocked, but eventually she agreed to meet him. And that’s how, 10 years ago, Mr. Takashi became Yamada, his longest-running and most controversial role.

“It was a very complex emotion that was there,” Takashi recalls about his first meeting with Megumi. “She asked me why I hadn’t come to see her before, and I felt her resentment.”

The actor started seeing Asako and her daughter two times a month. He joined them on outings, trips to the cinema and birthday parties, and the mother recalls that it didn’t take long for Megumi’s behavior to improve considerably. She was happier, more outgoing and talkative, and she even decided to go back to school. That’s when Asako knew that her deception had been worth it.

“Gradually she became happier and more confident,” Takashi confirms. “I used to meet her with Asako, the three of us together, but one day she said, ‘I want to go out with my father, just the two of us,’ so I took her out and she held my hand for the first time.”

Hiring Takashi every month requires Asako to manage her finances carefully. Every time she requires his services, she has to pay around 10,000 Yen ($90), so she has to cut costs elsewhere in order to afford it. But remembering how unhappy her daughter was before her “father” came back into her life, she believes it’s money well spent.

But money has never been the real problem with this bizarre arrangement. It’s the emotional attachment and ethical implication of faking a relationship for over a decade that make this story controversial. For example, Mr. Takashi admits that his character, Yamada, and Megumi have become very close. They act like family and tell each other ‘I love you’, even though only one of them actually means it.
“Switching personalities and identities is very important in this job,” the actor said. “But I’m human, and so, of course, it would be a lie if I said I don’t feel any emotional conflict saying, ‘I love you,’ to that child. But this is a business, I have to do it, and I have to keep reminding myself of that.”

And although he is currently committed to his character, Takashi admits that the longer this role takes, the more complicated it will become. For example, if Megumi, who is now a young woman, marries and has children, he will have to take on the role of grandfather as well, and the stakes will get higher and higher.

Things are complicated for Asako as well, as she admits that after 10 years of faking a relationship with Yamada, she has developed feelings for him. She even confessed her feelings to him, but had to face the reality that she was in love with someone who wasn’t real. Takashi had to be very straightforward and tell the woman that he was only with them because he was being paid for it, and she had no choice but accept it.

“I’m very aware that he’s only with us because we’re paying him,” Asako said. “I sort of fantasise about our relationship, that maybe we can be a real family, but the relationship as it is actually helps me emotionally and mentally as well. It keeps me stable.”

And what if Megumi’s father shows up one day? Asako thinks that it’s very unlikely, seeing as he disappeared almost two decades ago and hasn’t contacted them since, but if it does happen, she likes to thing that her daughter would choose the fake Yamada over the real one, as he was the one who actually acted as a father, even though he was being paid for it.
Asako claims that ideally, Takashi will retain his role as Yamada indefinitely, that he will be present at her daughter’s wedding, then take on the role of grandfather. Even though she understands that many people probably disapprove of her choice to offer Megumi the illusions of having an “ideal father” she stands by her decision.

“I know some people think it’s foolish to pay money to lie to my own daughter and to have a pretend father, but I was desperate,” she said. “Anyone can understand that horrible feeling of desperation, to see your child so hurt.”

As for Takashi, he says that if Megumi was ever to find out the truth, he likes to think that he would thank him for being supportive, but he admits that there is a big chance she will be devastated by the revelation.

“This is one of the big issues of renting a family,” the actor said.

This story was originally published by the BBC. The names mentioned have been changed in order to protect the protagonists’ privacy and prevent Megumi from uncovering the truth before her mother is finally ready to reveal it.

Saxon is a prolific writer with passion for the unusual. I believe the bizarre world is always exciting so keeping you up to date with such stories is my pleasure
Previous “Pink Legacy” Diamond Sets New World Record By Selling For More Than $50M
Next See 11-Year-Old Chinese Girl Already 6ft 7in Tall