An Irish football team is buzzing the internet for the very wrong reasons after it claimed one of its players had suddenly died just to get officials to postpone a match they were not yet ready to play.

The club claimed the player was killed in a traffic accident while returning home from training two days before the game so they could get enough sympathy to have the game called off. 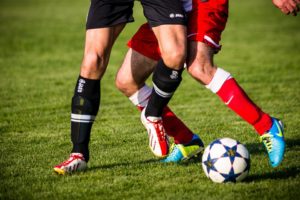 Ballybrack FC was due to play Arklow Town in Ireland’s Leinster Senior League last Saturday, but the match had to be called off after Ballybrack representatives announced that one of the club’s foreign players, Spaniard Fernando Nuno la Fuente, had died in a terrible car accident.
The entire league was stunned by the news, minutes of silence were held before the beginning of all the other matches, players wore black armbands in memory of la Fuente, and some teams even expressed their condolences on social media.
In a dramatic twist, the shock of the player’s death paled in comparison to the shock of later learning that he hadn’t actually died, but simply traveled back to Spain.
League officials postponed the match Ballybrack and Arklow Town, but soon learned that Fernando Nuno la Fuente’s alleged death had been a ruse to get them to do just that. The lie came apart when the League got in touch with la Fuente’s club to see if there was anything they could do to help and if they could get in touch with his family to express their condolences. The response from Ballybrack FC made everyone very suspicious.

“Things started to unravel here when we followed up on Monday to see if we could get in touch with the lad’s family and see if there was anything we could do,” league chairman David Moran told The Irish Times. “They said the body was already back in Spain which didn’t really add up.”

“We got a call back saying that his body had been sent back to Spain and that’s when the alarm bells rang. I was saying ‘what do you mean?’. They wouldn’t have been able to do an autopsy or whatever in that time,” Moran added. We started investigating it yesterday and then I got a call saying that he had just left to go home to Spain. “I’m delighted the young lad’s alive but I’m absolutely dumbfounded by what’s going on.”
Once the cat was out of the bag, Ballybrack FC officials had no choice but to issue an apology to everyone affected by this “grave and unacceptable mistake”. The club’s secretary has already resigned, but it’s still not clear if he was the person responsible for the fake announcement. Ballybrack only stated that this person “has been experiencing severe personal difficulties unbeknownst to any other members of the club”.

As for Fernando Nuno la Fuente, the player who had supposedly died in a car crash, he recently told Irish media that he was contacted by someone at his former club last weekend, who told him that he may hear reports that he had been involved in an accident. But he thought ‘accident’ meant something minor, not death.
“I was aware there was going to be some story on me but I thought it was going to be me breaking a leg or something like that,” the player told the BBC. “It was OK because it was a broken leg, I thought. I didn’t care because I wasn’t there any more. If I wasn’t getting in any kind of trouble, why should I care? These little lies, everyone tells once in a while.”
When he first heard the news that he had allegedly died, the Spanish amateur footballer admits thinking that the idea of a man in his 20s dying in a tragic car crash was “sad” (especially since that man was him), but says that watching his own death in the news was also “funny”.
Asked about what possible reason his former club might have had to resort to such tactics to postpone a game, La Fuente said that he didn’t believe they were scared of their opponents, but rather that they had issues getting the players on the field on match day.

“They don’t play football professionally. Most of them have regular jobs and some of them work in the UK. I think that was the issue. It was nothing major.”

Saxon is a prolific writer with passion for the unusual. I believe the bizarre world is always exciting so keeping you up to date with such stories is my pleasure
Previous Coldest Town On Earth Where Temperature Could Go As Low As Minus 50 Degrees C
Next Chinese Company Fines Employees Who Do Not Walk Up To 180,000 Steps Per Month As Health Policy