An Indian woman’s strange illness has made her to spend the last 20 years of her life dipping herself and submerging for hours in a lake.

The 65-year-old woman, Pataruni Gosh, from a village in India’s West Bengal allegedly spent every day for the past two decades submerged up to her neck in the waters of a nearby lake, as a result of this an unknown disease.

She allegedly lives in an unspecified village in West Bengal, India. 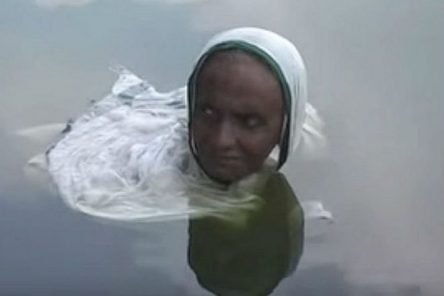 This story reportedly went viral in Russia and has not been confirmed by other media outside that country. But because the story was accompanied by a video of the woman, there seems to be some facts in it. Her name, Pataruni Gosh, was also translated from Russian with Google Translate.

Reports have it that every morning, the woman gets up before sunrise and walks into a nearby lake where she remains submerged up to her neck until the sun sets. She has been doing this religiously since 1998, when she started suffering from a mysterious condition that left her body inflamed and sore. The only thing that seemed to relieve the woman’s pain was water, so she started spending her days in a lake close to her village, and she’s been doing it for over two decades now.

Gosh reportedly spends between 12 and 14 hours in the lake every day, as she and her family live in a remote area of West Bengal and are too poor to go to a hospital for treatment. At sunset she rises from the water and goes home, where she does whatever work she can before going to sleep.

The “Indian mermaid” reportedly eats only a bit of rice and some vegetables all day, as her condition and sedentary lifestyle have affected her appetite. Her relatives usually take her meal to the lake, and she eats in the water to protect her skin from the sun.

Pataruni can’t stand being alone, so members of her family and other villagers regularly come to see her and keep her company from the sure. While her relatives have expressed concerns for her well being, they don’t know how else to help her.

The superstitious people of Pataruni’s village believe that she will one day become the spirit of the lake, after spending so much time in it, but her family hopes that they will be able to one day take her to a doctor and cure her of the mysterious disease.

Saxon is a prolific writer with passion for the unusual. I believe the bizarre world is always exciting so keeping you up to date with such stories is my pleasure
Previous Chinese Company Fines Employees Who Do Not Walk Up To 180,000 Steps Per Month As Health Policy
Next Lecturer ‘Transforms’ Into Spiderman To Attend To Students During ASUU Strike (Watch Video)