Home / Europe / Wealthy Business Man Madly In Love With Gold Jewelry Wears 13KG Of It Worth N198 Million Wherever He Goes, But With Five Bodyguards

Wealthy Business Man Madly In Love With Gold Jewelry Wears 13KG Of It Worth N198 Million Wherever He Goes, But With Five Bodyguards

How far can you go just to express your love for your obsession? Checkout what a man did to express his obsession with gold.

A Vietnamese business man is currently an internet sensation after videos of him wearing a total of 13kg of gold jewelry went viral on social media. 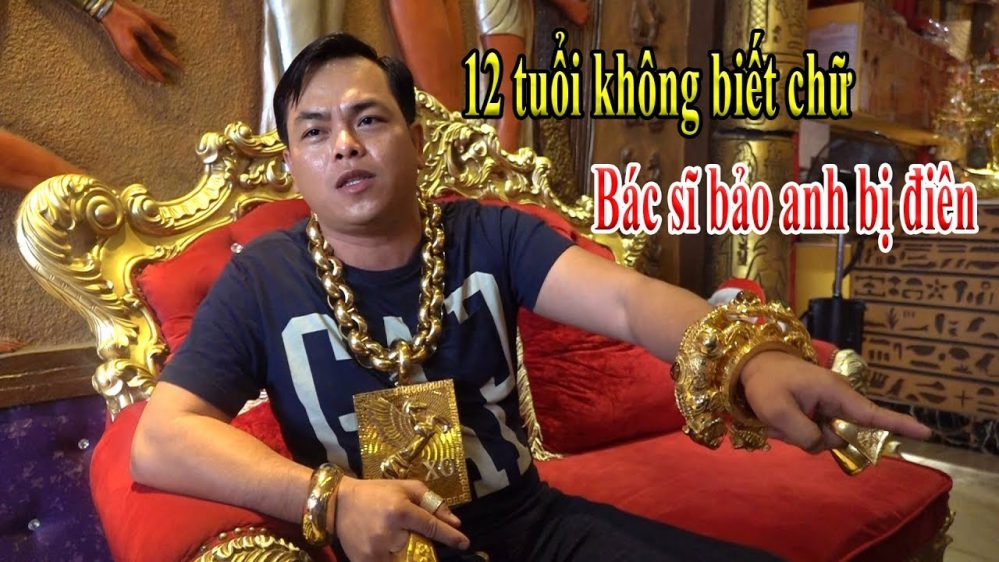 The 36-year-old businessman has been attracting a lot of attention on Asian social media sites for his obsession with gold.
Tran Ngoc Phuc wears a total of 13kg of gold wherever he goes, and is always accompanied by at least 5 bodyguards who make sure that no one tries to steal it.
Phuc first started making headlines in Vietnam last week after a series of YouTube videos of him showing off his massive jewellery went viral, getting several millions of views. Since then, photos and videos of him wearing his huge gold necklace, bracelets and rings have been doing the rounds on Vietnamese social media, and even on several websites in China and Thailand. While some people expressed their doubts that the jewels are real gold, most commenters wondered how he can stand walking around with so much extra weight. The businessman admitted that wearing the jewellery took some getting used to , but claimed that it was worth it as all the gold has boosted his good luck and prosperity. 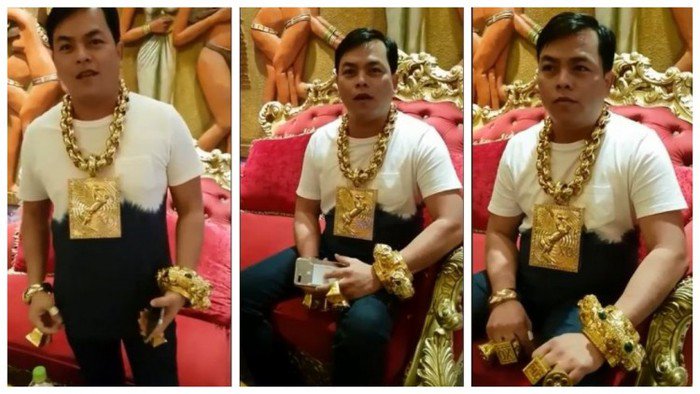 He told Vietnamese reporters that his current collection of oversized gold accessories consists of a 5kg gold chain and medallion, two large bracelets weighing 5kg each, four 500g rings and a gold waistband. All together they weigh 13kg and are worth an estimated 13 billion Vietnamese dong ($550,000).

The young businessman revealed that he started ordering his giant gold jewellery 5 years ago, after a feng shui consultant told him that it would increase his good luck.
He first commissioned the large gold chain and medallion featuring a winged horse, but then decided that more gold meant more good luck, so he had the other pieces done as well. Phuc recently revealed that he plans on ordering a custom gold hat and shirt as well to go with all his current accessories.
13kg of gold jewellery is a lot to carry around, and Tran admitted that it was pretty hard at first. He would wear it for a while and take it off when it became too uncomfortable, but he got used to it eventually. The heavy chain and medallion have given him the most trouble, as his neck started hurting because of the extra weight. At one point, he stopped wearing it and went to see a doctor because the pain wouldn’t let up. The physician thought he was crazy when he said that the pain had been caused by an extra large gold chain and medallion, but then he came back wearing his jewellery and the doctor prescribed some medication.

Phuc, who also goes by Phux XO, after the name of a luxurious karaoke club he owns in Ho Chi Minh City, grew up in a poor family, but made his fortune in his 20s, by trading oil. He claims he started off with one barrel, but anticipated a steep increase in price and borrowed money from family and friends to buy more cheap oil and sell it when the price became high enough. His gamble paid off as oil prices skyrocketed from 5 thousand dong to 8 thousand, and then 10 thousands almost overnight, and he made enough money to start his own profitable business.

Saxon is a prolific writer with passion for the unusual. I believe the bizarre world is always exciting so keeping you up to date with such stories is my pleasure
Previous This Ukrainian Lady Hasn’t Had A Haircut In 28 Years
Next Man Drinks Battery Water After Catching Wife With Lover