Top Ten Most Expensive Shoes In The World, Number One Costs $15 Million

Gone are the days when shoes were worn just to cover the feet. These days they are an essential part of a person’s wardrobe and fashion swagger. This is why the classy now express class through their footwear, among other components of exotic dressing. Here’s a list of ten most expensive shoes in the world as compiled by Beautiful life. 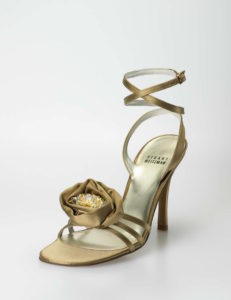 This pair of shoes was Inspired by the yesteryear star who famously crooned “Diamonds are a girl’s best friend”. Weitzman created these gorgeous shoes using crystals which Marilyn herself used to hear at one point of time. They took a lot of effort to create and it shows in the craftsmanship. Worn by Regina King at the 2005 Oscars, the shoes not only managed to make their presence felt at the event but also fetched a princely sum of $1 million at an auction. 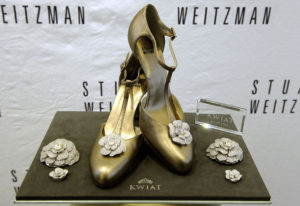 These shoes are designed in the 1940s style by Weitzman. The pretty retro heels feature a signature T-strap which was commonly found in that era and is worth $1 million. The toe portion of these shoes feature rose ornaments made of 1,800 Kwiat diamonds and having a total carat weight of 100 carats. Apart from these beautiful features, the shoes themselves are studded with another 400 Kwiat diamonds. 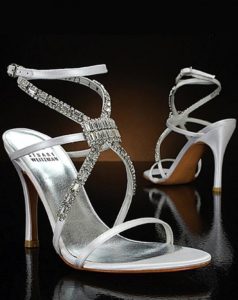 This is another special piece from Stuart Weitzman. The heels are decorated with 464 pristine diamonds all over the body. The unique feature of these shoes is that the straps that adorn the shoes are easily removable, and you can actually wear them around your neck as a statement piece. So, it’s style meets functionality of the highest order. First showcased at the 2002 Academy Awards, these shoes are likely to make any woman happy and any man poorer by $1.09 million. 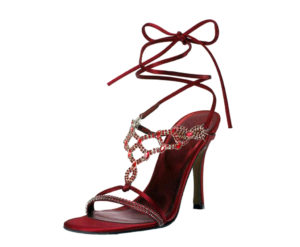 Wizard of Oz sure kick-started a trend, didn’t it? After Harry Winston’s rendition of the ruby slippers, comes a more updated version of the same by Stuart Weitzman. Only this time around they are heels. Eye-catching and glamorous, these shoes were made using 123 karat rubies. 643 pieces were used in total and they were set in a pound of platinum, the rarest metal on earth. The shoes carry a price tag of $1.6 million. 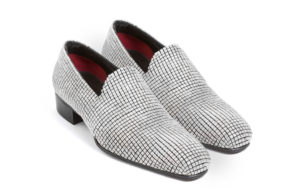 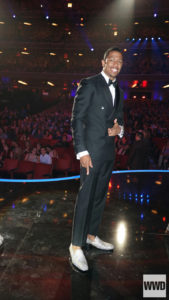 When Nick Cannon hosted the 2014 America’s Got Talent, he wanted to make a statement. And he managed to surpass expectations by wearing a pair of $2 million all-diamond shoes. The Tom Ford shoes were custom designed by Jason Arasheben, the well-known jewelry designer, and they were a sight to behold. More than 14,000 full-cut round white diamonds were carefully set onto white gold. The total carat weight was a staggering 340 carats. The bedazzled shoes took more than 2,000 man-hours and almost a year to complete, and by the looks of it, were well worth it. 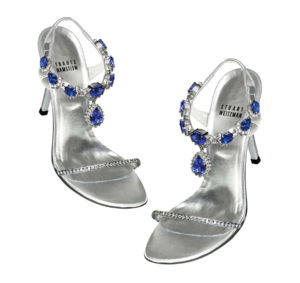 The third Stuart Weitzman entry on this list, these stiletto heels were the product of collaboration between Eddie Le Vian and Weitzman. Worth $2 million dollars, these heels are a grand sight to behold. After all, how could they not be, being adorned with tanzanite, a gemstone of extraordinary appearance? The straps feature 185 karats of tanzanite along with 28 karats of diamonds. What makes these shoes even more attractive is the fact that they are made of shining silver, giving them a delicate, ethereal look. 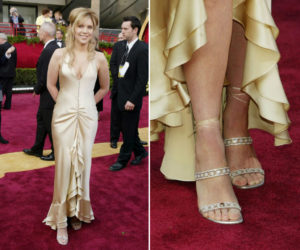 Another Stuart Weitzman creation, these stunning slippers were crafted from Italian leather. The inspiration was the popular fairytale character, Cinderella. 565 Kwiat diamonds were set in platinum and twisted into a complex, lace-like design to make the toe straps and ankle. If that’s not enough, the right shoe houses a 5 carat amaretto diamond, which alone costs over a million dollars. The 4-inch stilettos were worn by Alison Krauss, the country singer, to the 2004 Oscars and appeared to melt into the background, leaving the crowd to gawk at the masses of sparkling diamonds. 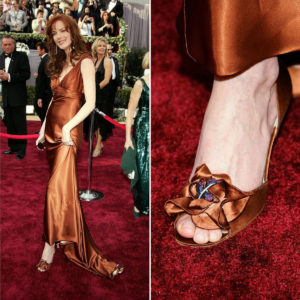 One of the Old Hollywood darlings, Rita Hayworth found a place in fashion history when a pair of earrings worn by the star was fashioned into shoes by Stuart Weitzman. What stands out about these heels is the lovely, muted shade of Sienna Satin used in its construction – a welcome change from all the glitz and glam commonly found in expensive footwear. The earrings are prominently featured in the middle of the shoes and elevate the whole look to sheer poetry. Despite its understated elegance, this pair features various types of precious gemstones, from diamonds to sapphires to rubies in a satin ruffle near the toe section. Valued at a cool $3 million, these open-toed heels are not for sale – they are the property of Hayworth’s daughter, Princess Yasmin Aga Khan. 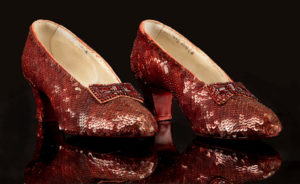 Jewelry designer Harry Winston’s son, Ron Winston, wanted to commemorate the 50th anniversary of the Hollywood classic The Wizard of Oz in the grandest way possible. And he chose to do so by replicating the ruby slippers worn by young Dorothy. Meticulously crafted using 4,600 rubies, these shoes represent the height of luxury. Apart from 1,350 carats of rubies, these beautiful shoes also feature 50 carats of diamonds. Bearing a $3 million price tag, these ruby slippers far outshine the original, which were created using plain red sequins. 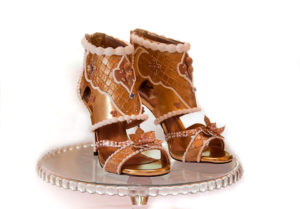 At number one is Debbie Windham high heels.
The pair goes for $15.1 million (about N5.4 Billion). Commissioned as a birthday present, this frightfully expensive pair was designed by Debbie Wingham, who is no stranger when it comes to creating luxury items. The high heels are set with some of the costliest and rarest gemstones in the world, like blue and pink diamonds, which explains the ridiculous price tag. The body of the shoe is crafted from platinum while the plaque is pure gold. The remainder of these shoes is made of leather but feature 24 carat gold paint. 18 carat gold threat for used to stitch this priceless pair.

Saxon is a prolific writer with passion for the unusual. I believe the bizarre world is always exciting so keeping you up to date with such stories is my pleasure
Previous Man Drinks Battery Water After Catching Wife With Lover
Next Company Willing To Pay You N36 Million If You Can Give Up Your Smart Phone For One Year