A Russian priest now being described as ‘evil priest’ or ‘devil priest’ is currently buzzing the internet after viral video shows him violently dipping a two-year-old’s head into water. 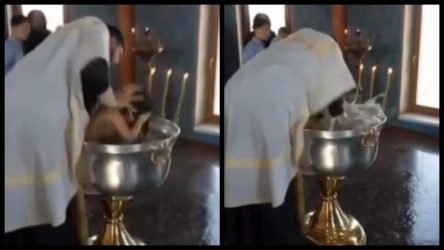 The disturbing video shows the Russian orthodox priest violently dunking the head of the two-year-old girl underwater while baptising her in Yessentuki, South West Russia.

The video, which was originally shared on Facebook, has gone viral. It has been subjected to great criticism by social media users who have objected to the priest’s excessive use of force. The priest was called sick and a maniac, who ‘serving the court of devil’, not God.

The video opens to the orthodox priest, Illia Semlitove, who is a priest at St George’s Convent, firmly holding the back of the head and neck of a baby girl before brutally pushing her head into the water, three times in quick succession.

The priest’s body language during the said action can be gauged from the fact that the girl is seen visibly shaken up while gasping for breath in between the three head dips. Water is also seen gushing out of the font, due to the impact of priest’s pressure.

This disturbing video is currently causing outrage among the online community.

(With reports from India Today)

Saxon is a prolific writer with passion for the unusual. I believe the bizarre world is always exciting so keeping you up to date with such stories is my pleasure
Previous Company Willing To Pay You N36 Million If You Can Give Up Your Smart Phone For One Year
Next Plane Turns Around Mid-flight After Forgetting To Unload Human Heart At Airport